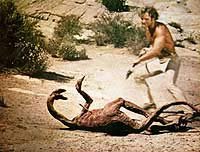 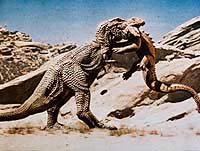 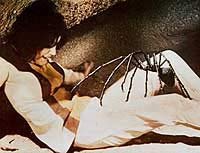 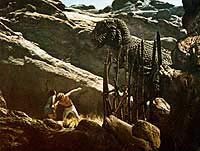 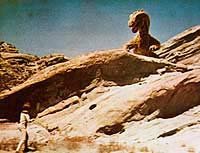 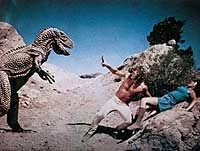 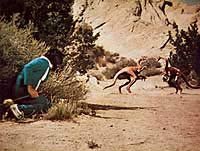 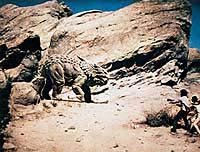 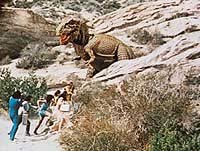 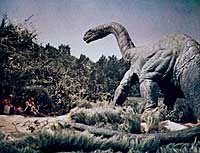 By all rights the Planet of the Dinosaurs should be really, really, really bad. And yet, against all odds, it actually sort of works. What helps this movie are the stop motion dinosaurs. There is a wonderful variety of dinosaurs, and they all look great and do fun and interesting things (like fight each other and kill people). However, all other elements of the movie are very low budget and inferior. The music is, take your pick, oddly passable or horribly grating. The acting is amateurish, but passable. The costumes...ouch. Those are some unflattering jumpsuits.

The other element that works is that there is a pretty decent story in here. About a dozen people manage to escape in a small life-ship from their exploding interstellar spaceship. Based on watching the crew in action through the rest of the movie, I have no doubt the cause of the explosion was some form of operator error. The survivors just so happen to be the captain, the most important officers and the owner and his secretary (so much for the captain going down with the ship). The survivors plunge toward the nearest planet and crash into a lake.

How will a crew of space travelers survive in a prehistoric world? It's a good question, because this group is completely clueless. It used to be said that astronauts had to have the 'right stuff.' These folks don't have any stuff. When the captain asks for the ships position, the navigator has no idea. As the survivors swim to shore, the captain asks the radio operator to send the distress signal. She responds that she forgot the radio on the sinking life-ship. When the secretary panics and goes hysterical while crossing a stream, one of the officers gives her a ray gun. Good idea! Give the gun to the freaked out person who has never used a gun in her life! She promptly drops the gun in the water, ruining it forever (gee what pathetic weapons).

After this bad start to a life of survival, things begin to settle down. Maybe they can make it after all? In between long shots of the crew struggling over rocky terrain with the oddly workable theme music playing, there are several interesting dinosaur actions, mostly involving a crew member getting picked off here or there. But hey, these guys are trying hard, and they sure are sincere! The main discussion is between the captain and the first mate regarding their survival strategy. The captain wants to keep moving, staying safe by not sitting in one place, and the mate wants to fight it out with the most dangerous of the predators, the T-rex. Sometimes the captain and the mate have a heated argument, but afterward they go off and discuss their feelings with one of the sympathetic women. (The movie was made in the late 1970s and men have feelings too!)

Eventually, they make a stand and fight it out. And low and behold, they pull it together and win! As the movie ends they are settling down, confident and happy, in a cave man style life. I feel glad for the survivors. They have come a long way. And somehow, I can't help but like this movie.

Review by retrorocketx from the Internet Movie Database.