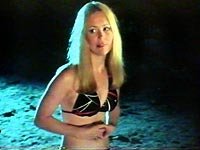 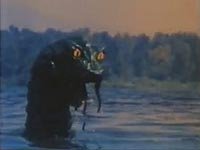 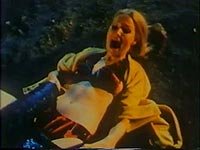 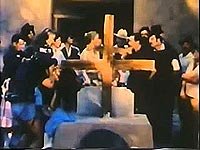 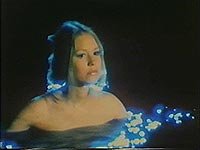 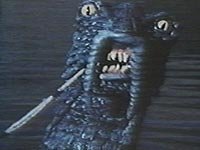 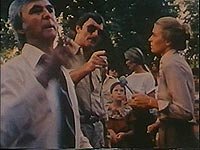 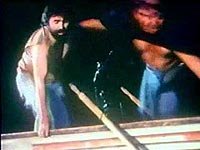 Sure, this is one of them bad movies, but on the other hand, it's yet another good bad movies! The sexual politics of this one alone are hilarious, but wait till you get a load of the monster.

A woman is having a bit of a dance for her boyfriend while he lounges in a hammock ignoring her next to a lake and the next thing you know he's being grabbed by a huge slimy claw and killed. The lake is in Colombia, but the cement factory next to the lake is US owned. Back in the US, the boss of the factory explains to troubleshooter Jim Mitchum (in between groping his secretary) that Jim's go to go down there and sort things out, as a local revolutionary called Sanchez is causing trouble by claiming pollution from the factory has caused some sort of monster to go on the rampage. There's also a news reporter there also reporting on the pollution.

Jim's got to go down there and clean up the whole mess. In the town by the lake, the factory boss is having trouble dumping his girlfriend for the mayor's daughter and gets confused doing so and then they end up having sex by the lake, followed by a classic dumping by the factory boss, resulting in the creature chewing the girlfriend's legs off (one of the few gore pieces of the film).

Naturally, Jim's put out by this, and a confrontation with Sanchez, and as Sanchez says: "We'll see who kicks who's arse". He's also having run ins with the reporter (seemingly being paid to hang about one place reporting on every single thing that happens there), as this is the seventies, Jim gets her in the sack pretty shortly. Add to this two nosey kids, John Carridine as a priest, and the first victim's missus being called a witch and being harassed by locals (ala Don't Torture a Duckling) and you've got a rather large cast to deal with. Also, Aldo Sambrell's in the cast too.

Apart from Sanchez (who these days would probably be the hero, what with his pro-environmentalrevolutionary stance, here he's made out to be a fanatic), everyone gets it together to rid the lake of the creature once and for all, and we get to see the creature in full. Try not to laugh too much! I've got to give to the makers of the film – they aren't shy in showing the creature, no matter how crap it looks.

I love films with giant monsters in them, so I was fairly happy with this one. Maybe a wee bit too much interpersonal drama by a too large cast, but the creature itself is worth seeking this one out. That, and the way that woman are portrayed in this one (either sexual objects or witches), I guess there was one strong female character (the mayor's daughterhelicopter pilot), but big Jim gets confused by a female being a pilot. There's also a nice sting in the tale and for some reason, the film is called Monstroid at the start of the film but Monster at the end? There's no way this film was made in 1980 (I see now it was mostly made in 1971).

Review by Bezenby from the Internet Movie Database.