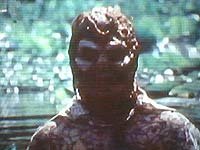 I always heard that this was the absolute worst zombie movie of all time, but I'd much rather watch this than Zombie Nightmare, Revenge of the Dead, or Children Shouldn't Play with Dead Things... definitely. You could do a lot worse than watching this movie, which actually has some pretty fun moments. I mean, people that this film was made for will probably find it appealing no matter what anyone says about it; anyone that is looking for a serious horror movie in here probably doesn't realize that the title of the movie is "ALIEN DEAD", which makes ME laugh quite a bit. Eh.

This film, which was made for $12,000 (and they used every penny of it), is about a meteor crashing and turning rednecks into zombies. The film suffers from a really grainy look and features horrible sound (which may have been cleaned up for the recent DVD release.. whoopty doo). The editing is quite awful; there are a few times when they cut to another scene while someone is talking (kind of like near the end of Invasion of the Blood Farmers when the cop is talking and picks up the phone and says "F..." and then it cuts to a scene of a guy driving -- what?!).

The story is terrible, the "effects" are terrible. A person will get killed, but the camera cuts away really quickly and then shows the aftermath of blood being in a big hole in a woman's chest. Or another woman will get stabbed with a pitchfork, but you won't see it actually enter the woman -- you'll just see the pitchfork sticking out of her back. It's quite laughably bad, but at least they tried to give some gore, with some of the zombies chomping on entrails. The musical score is cheesy but good; however, they actually use real country songs to add "ambience" to the redneck surroundings, which is hilariously awful.

When it was over, I can safely say I wasn't bored and I distinctly remember enjoying myself throughout the whole thing. However, it's kind of hard to write a really detailed review for this, as this flick is pretty much unmemorable when it's all said and done.

Review by polysicsarebest from the Internet Movie Database.