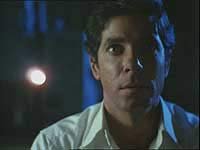 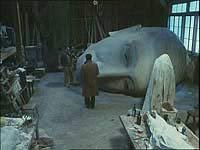 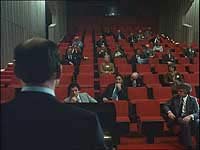 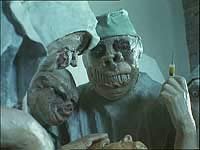 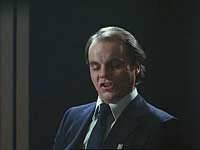 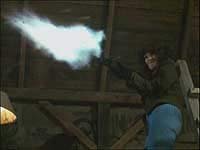 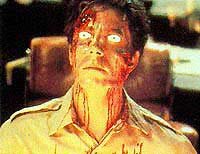 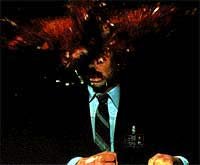 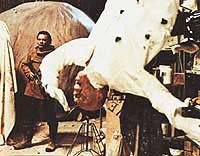 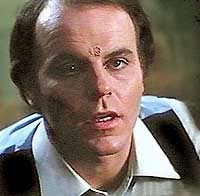 The most talked-about sequence in "Scanners" occurs about 12 minutes in, where a so-called "Scanner" (Louise Del Grande), people born with almost unlimited psychic abilities, attempts to read the mind of a volunteer, as part of a demonstration of his talents. A volunteer in the crowd offers to have his mind read. The two sit down at a table at the front of the auditorium, where the demonstration is taking place. As the demonstration progresses, both men are in clear agony and distress, though one of them is in more pain than the other. Suddenly, the head of Scanner Louise Del Grande explodes.

This shocking, horrifying moment is the key special effects achievement of David Cronenberg's 1981 sci-fihorror shocker "Scanners," which has the benefit of being the Canadian gore maestro's first international break-out hit. It would allow him to develop up his philosophically-inclined, gore-filled sci-fihorror template even further with "The Dead Zone" and "Videodrome" (both of which were released in 1983), his only Oscar-winner "The Fly" (1986) (which remains Cronenberg's unrivaled masterpiece, in my opinion), and concluded his run in the '80s with "Dead Ringers" (1988).

"Scanners" was Cronenberg's fifth commercial film. In many ways, it also represents his first effort with Really Big Ideas. "Scanners" promises to be a thriller unlike any other at the time, although psychic-themed horror pictures had prefigured his work here with "Carrie" (1976) and "The Fury" (1978). Elements of corporate espionage, government conspiracies, paranormal research, and unethical medical and pharmaceutical testing - all figure into "Scanners," as well as the usual gun fights, car chases, and explosions.

I first came across "Scanners" about 12 years ago, and was not that impressed; I was on a binge for all things David Cronenberg and I had heard nothing but good responses about "Scanners" - so that was the next essential viewing in my eyes (especially after "The Fly," which I'd kind ofsort of grown up on). Maybe because I was more interested in the gore and special effects than the thematic and philosophical complexities of his work, that I came to overlook "Scanners" the first time around (despite the "head exploding" sequence and the film's grisly psychic showdown at the end). Now that "Scanners" has been given the Criterion Collection DVD treatment, I felt inclined to view the film again and was this time quite surprised and thrilled at what I was seeing.

The film details a war between the forces of Darryl Revok (Michael Ironside), an immensely powerful rogue Scanner with dreams of a Scanner supremacy, and those of ConSec, a shadowy corporation involved in Scanner research and development. ConSec recruits an extraordinarily powerful, unaffiliated Scanner named Cameron Vale (Stephen Lack) to find Revok and stop him. In the course of his battles, Vale learns to gain a better handle on his abilities - with a little help from his handler Dr. Paul Ruth (Patrick McGoohan) and a fellow extremely powerful Scanner named Kim Obrist (Jennifer O'Neill) - leading to a grisly psychic showdown between himself and Revok that no doubt solidified Cronenberg's "gore maestro" reputation and also extensively utilized the grotesque prosthetic make-up effects of Dick Smith (whose work includes, above all else, 1973's "The Exorcist").

Like all of Cronenberg's work at the time, "Scanners" is about the beauty of "bodily destruction" and the disease of the mind or body (though in relation to his earlier work, like "Shivers," "Rabid" and "The Brood," it lacks the perverse sexual content of those films). "Scanners" explores disease of both mind and body, by exploring the effects of pre-natal experimentation (remember, Scanners are born with their abilities), the fact that most Scanners can barely control their abilities (once they realize that that they have them and what they are), and what Scanners are capable of doing to others (the act of "scanning" is described as being able to connect two separate nervous systems through space).

Although the film is still low-budget and features largely unknown Canadian performers, it still does not mean that Cronenberg was working with an inexperienced crew. As I plainly stated earlier, he's a director with Big Ideas, and recruiting Dick Smith to design some of the film's most grotesque (yet ambitious) special effects and gore sequences was a smart decision. Seeing these effects 33 years later, they still hold up and are far better than anything that could possibly be achieved with a computer (I think of Vale's psychic attack on the ConSec computer room as a pristine example).

"Scanners" can be seen as having been quite influential on the science fiction film genre - with two well-known examples that I can think of being Katsuhiro Otomo's epic Anime' "Akira" (1988) and Josh Trank's 2012 found footage superpower flick "Chronicle.".