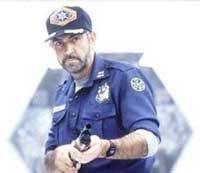 " This movie is strange for the singular reason that it isn't great but you can watch it multiple times and never seem to get tired of it. "

I don´t remember if i´m allowed to start my comment by quoting another persons review, but i think the guy who wrote this is absolutely right.

And why no matter how many times we see this movie, 6 months past we can´t clearly remember the details like we can in other movies no more? I must have seen Outland about fifteen times since i first saw it on the theathers when it came out, and after a while i want to go back to it, because i can remember the solid sci-fi atmosphere but i can´t visualize the whole movie clearly in my mind no more. Pretty weird feeling... This isn´t even a great movie, but it has this quality, that makes it almost impossible to turn away from it. For me i guess, it´s that realy believable atmosphere of a possible future, as i don´t believe much in that carpeted spaceship Star Trek look. I can bet that if we ever get to have some colonies in our solar system, they will look very similar (and as depressive), as the ones presented in Outland, wich is a sad fact unfortunely, but makes this movie stand out from all the tons of sci-fi movies.

Everyone who sees it once, will remember it for a very long time, and this is because despite all the westen clichés set in space, this is a very original story, maybe not in its idea but in the way it´s presented to the audiences. And it´s a strange movie, because it´s very hard to classify. Despite being now an old movie, it has better visuals and special effects than many new releases and you can totaly forget that this movie is now about 20 years old. And there is not a single computer generated effect on sight. It must be one of those rare movies out there wich can only be classified as pure sci-fi and nothing else. It has action, but it always feels that never reaches for the full potential in what could have been done, so it can´t be classified as an action film also. It has a disturbing and creepy atmosphere sometimes, some gore scenes but it isn´t an horror movie. It has that classic cops plot made and re-made a million times from westerns to modern cop shows, but it´s not any of those kind of movies. What we have here is an ambiguous movie that´ends up being very dificult to classify, and perhaps that´s what makes it special and weird at the same time.

Because contrary to Blade Runner for example, this movie doesn´t have a fan base, and i don´t think it can even be classified as a cult movie. Outland belongs to its own category and that´s what makes it special and never forgotten, despite nobody ever remembers anything clearly about it.

It´s sci-fi. And a very good sci-fi story despite some minor flaws. Peter Hyams has style and i think he did a great job with this movie. I wish he would go back to this type of "personal" movies and stop acting like a hired hand for Hollywood like it seems nowadays. With all the fast-food crappy so called sci-fi wich is around nowadays, Peter Hyams is the right man to still create a good science fiction movie. I wish he would made more movies like this and like 2010 wich is also excelent. So, if you like pure sci-fi and miss watching a good sci-fi movie, get this one because you won´t be disapointed. It´s an excelent strange movie. A real independent movie inside a major studio, if ever there was one.

A brilliant movie, without actualy being great. I know this sounds weird, but Outland is exactely like this.