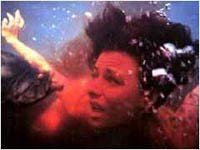 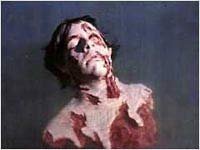 This straight sequel to Joe Dante's tongue-in-cheek take on JAWS fails in its attempt to be scary or frightening right from the outset, as the sight of poorly-animated flying rubber fish sadly don't cut it in terms of sleepless nights. Yep, the piranha are back (and you'll no doubt be pleased to here that they make the same noise as in the first one) but this time they can leap right out of the water and seemingly fly some distance across land to get their victims too. Sadly the fish are far from realistic, and in reality their appearance is funny instead of being frightening.

PIRANHA II is widely acknowledged to be a bad film, but it's at the top end of the bad film scale as it manages to be pretty entertaining. Sure, most of the action is familiar already from JAWS and the countless sequels and imitations that followed, but there are a couple of things this ItalianAmerican production has in its favour. It's also a lot more widely known than it rightfully ought to be due to the participation of James Cameron as the director (in fact he was fired before filming finished and only did a week or so's work). You wouldn't realise that Cameron is the director by watching, though, because the direction is mainly static and weak and the photography poor. The movie has a grainy look which makes it seem cheap and dirty.

The acting, too, is nothing to write home about. Tricia O'Neil just doesn't appeal as the heroine, because she's bland and too old in my eyes. Similarly, Steve Marachuk - playing a biochemist - is incredibly wooden and exceedingly dull. The only real cast interest comes from the participation of the dependable Lance Henriksen who plays the cop investigating the cast. Henriksen - later re-teaming with Cameron for THE TERMINATOR - is as good as ever, chewing the scenery on occasion and all-round being a guy you wouldn't want to mess with. Love that scene where he jumps from a helicopter which crashes into the sea.

Otherwise, the usual quota of boring teenagers pad out the cast, along with stupid appearances from a dentist that are supposed to be funny. Periodically some sex and nudity is included in an attempt to keep the audience awake, perhaps. Likewise, there are a couple of fun shock scenes to enjoy as well, the highlight being the moment a piranha jumps out of the chest cavity of a corpse in the morgue! The gory special effects come courtesy of Giannetto di Rossi, the guy who did the splattery work on ZOMBIE FLESH EATERS. I'm pleased to say that di Rossi's work here is almost up to the same scale although not as explicit, and the blood flows freely in some of the fish attacks.

The ending sees a couple of people going down into the wreck of a ship where the piranhas are spawning and set off a dynamite charge. The film then ends suddenly. Personally I would have liked to see some epilogue scenes of dead fish being swept up on the shores but we are just to assume that the rather small explosion killed the entire shoal, I guess. In all, unimaginative stuff, but the gory effects work keep it watchable and not the worst of the JAWS rip-offs out there.