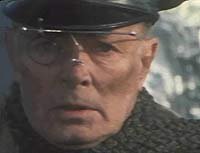 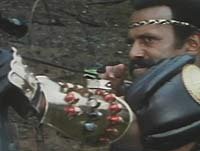 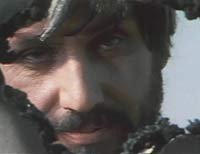 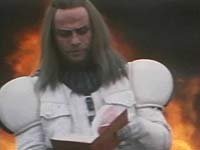 After 1990: The Bronx Warriors, director Enzo G. Castellari created this film, originally entitled The New Barbarians. The title change reflects the name New Line Cinema would use when they released the film in the United States. This movie checks off nearly every box when it comes to what it'll take to get me to love a film: it's Italan. It's a ripoff of Mad Max. It has George Eastman in it. It has a big name (well, in Italy) American star, Fred "The Hammer" Williamson. It's packed with enough weird quirks that would put off anyone else, but they made me fall in love with it. And oh yeah - Giovanni Frezza (Bob from House by the Cemetery) is in it.

2019. No relation to 2019: After the Fall of New York. But after a nuclear war, a gang called the Templars take it upon themselves to purge the Earth of anyone left alive. The film starts showing us just one of their attacks, as they take their modified cars and golf carts out for a spin, murdering a convoy of survivors. Normal humans might look ragtag and dirty, but the Templars wear all white battle armor and have punk rock hairdos. The gang are a real family affair, as Shadow (Ennio Girolami) is Castellari's brother and Mako (Massimo Vanni) is their cousin. Their leader is, of course, George Eastman as One.

After murdering everyone they've found, One tears a Bible apart and proclaims, "Books. That's what started the whole apocalypse!" and "The world is dead. It raped itself. But I'll purify it with blood. No one is innocent. But only we, the Templars, are the ministers of revenge!" Needless to say George Eastman is doing what he does best here: not only chewing the scenery but taking big bloody bites out of it.

Later, Scorpion finds the survivors of the attack and fends off some scavengers. He puts one man out of his misery and takes what's left for himself. We follow him as he meets up with his mechanic - yep, little Bob - who lives in an armored ice cream van, ala the KLF. They have a little gun battle, as you do, just to show that they're friends. Scorpion needs his gearshift fixed and the problem seems to be that there's an ear stuck in it. Yep. You read that right.

The Templars are looking for The Signal, the radio station that shows where humanity is still alive. Any car they see, they destroy, including the modified UPS van that Alma is in. They impale the driver and drag him off while she's saved by Scorpion after being caught and dragged by a net. Scorpion and Shadow have a war of words after our hero spares Mako.

Anyways, Scorpion takes Alma to his base where he repairs her shoulder and makes sweet, sweet love to her. Against One's commands, Mako leads a group of Templars against Scorpion, who is saved by Nadir (Williamson), an arrow wielding, well-dressed badass. No, seriously, let's all drink in the magic that is Nadir.

While Scorpion uses a car to roll over Mako's dead body, Nadir shoots one of his arrows directly into a Templar's neck, blowing his body to bits. Our hero sends Mako's body back to One as his answer to where he stands. When Nadir talks, saying stuff like, "I enjoyed...your little game...of war!" I lose my mind every single time.

One kills the rest of Mako's men while studying the fallen man's dead body. He yells, "We are the Templars. The warriors of vengeance. We are the Templars. The high priests of death. We have been chosen to make others pay for the crime of being alive. We guarantee that all humanity, accomplices and heirs of the nuclear holocaust, will be wiped out once and for all. That the seed of Man will be canceled forever from the face of the earth!" They honor Mako's dead body, saying that they will take ten thousand lives for his and will now hate and exterminate. But only One will have vengeance on Scorpion.

Our three heroes then meet a caravan of religious people led by Moses who have found The Signal, the aforementioned radio signal which will lead its followers to the last civilization on Earth. Alma and Nadir decide to stay with the caravan. And why would Nadir leave after he finds such perfect companionship with Vinya, a girl with glittery eye makeup, a side ponytail, access to booze and who does the deep concentration service and biorhythmic concentration (but it's been awhile since she's done it). This entire scene where she and Nadir talk about the end of the world before he starts making out with her? It's ridiculous and nonsensical and so perfect.

However, Scorpion claims that "heaven is dead" and that "memories are worth nothing." Man. He was emo before anyone knew what it meant. He walks in on Nadir, who has obviously just got done making love and says goodbye. The rest of the Templars find him in seconds and take him to One, who reinitiates Scorpion into the Templars by anally raping him. Yes, you read that right. All of the motorcycle helmet wearing dudes watch while hanging around on cars and bikes as One takes it to our hero. Well, I certainly wasn't expecting that. He gets interrupted by a scout who tells them they've found the caravan and that they need to finish off Scorpion while he kills everyone else.

Luckily, Nadir gets to Scorpion just in time. Not as luckily, doing so means that the caravan gets easily overtaken. He then yells at our hero, "Here lies the great Scorpion, in pain, victim of the big, bad queers, the Templars! All you had to do was ask. Nadir, I need your help. You're not so great now, Scorpion." But don't worry. One training montage later and the mechanic kid - let's call him little Bob, as that's what I always call Giovanni Frezza in any movie - and our heroes are back to save everyone.

One smokes some weed while listening to a tape that says, "If you could win the sky, if you could win the sky, I, this evening would have possessed the world. But I don't want to stain my name with ridicule. Fighting against the world of endless sky. Yet, I feel that soon, I too shall breach the supreme barrier." What? What is he listening to! The dude is just totally smoking up while everyone else is out there killing humanity!

This leads to One giving another amazing speech: "Idiots! Dreamers! Don't you understand? The world is dead! We have all closed our eyes! Even the heavens are silent! You! And you! And you! You are walking dead! Walking corpses! There is nothing left! Nothing. Not even The Signal you think you hear. Nothing. There's no more soul. There's no more hope. There's only one faith. One ecstasy. Death! And death you shall have, you last ugly dregs of humanity! You don't deserve to live!" A car filled with dead bodies shows up and interrupts, but they realize too late...it's a trap! Scorpion, Nadir and Bob are here to kill as many Templars as possible and save the day.

One and Scorpion have a stare down. It's obvious that beyond the rape earlier that these guys were lovers at one point. They have to be for this much pent up hatred. One gets off the first shot, but Scorpion has on clear body armor under his cape.

Meanwhile, Shadow starts taking out people one by one, killing Moses and Wiz. But Scorpion blows him away as Nadir takes out the rest of the Templars. There's even a scene where Bob saves Nadir, leading to a high five. Then, Scorpion tracks down One before he runs away and impales him in the ass with a drill before blowing his car up.

The survivors gather. Nadir's woman lived. So did Alma. And one would imagine that they'll look for The Signal, but that's it. Scorpion and Bob hold hands as Claudio Simonetti's synth score blares. All hail Warriors of the Wasteland! Or The New Barbarians!

I wish that Enzo G. Castellari had made ten of these movies. This is exactly why I watch movies - to be entertained, to yell at the screen, to jump up and down in glee. Exploding arrows, heads flying off, cars with domes and saw blades that hack off human heads - this one has it all! Throw in "The Hammer" as a bad ass who could pretty much carry his own movie - he's honestly way more entertaining than the lead - and you have a winner.

Seriously - with the idea of a religious group versus an evil gay biker army, this movie seems like a Jack Chick tract come to life. Yes, after the fall of man and the rapture, only a radio signal will lead us all to heaven, that is, if you can avoid all the rapes and murder. It goes without saying that this movie has no interest in being politically correct. The fact that no real animals were murdered makes it as woke as Italian cinema gets.