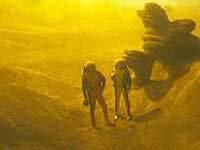 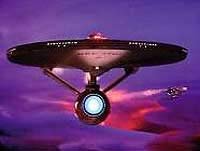 "The Wrath of Khan" isn't a science fiction film as much as it's an old-fashioned adventure story dressed up in vintage science fiction tropes. The plot: the crew of the Starship Enterprise, led by the now iconic Captain James T. Kirk, find themselves embroiled in a deadly cat and mouse game with Khan Noonian Singh, a genetically engineered superhuman. The story is pure pulp, but don't be put off. Director Nicholas Meyer's work here is fabulous, and his screenplay beautiful.

Meyer, a great writer with a fondness for literary classics, bathes his film with references to everything from "Moby Dick" to "The Sea Hawk". As a result, the film has a very nautical feel. Spaceships trade massive broadsides, our cast's uniforms, dialogue and behaviour are now informed by that of the 19th century British Navy, and the film's climactic battle feels like a cross between a U-boat suspense film and Herman Melville's famous whale hunt.

Meyer has long had a special fondness for 19th century novelists. His first big splash came in 1974 with "The Seven Percent Solution", a Sherlock Holmes novel that hit the #1 spot on the New York Times Bestseller list, stayed on the charts for 40 weeks and resurrected the Holmes pastiche craze the way "Wrath of Khan" jolted new life into Star Trek.

He followed that up with two sequel novels, "The West End Horror" and "The Canary Trainer". The former had Holmes and Watson brushing shoulders with Bernard Shaw, Gilbert and Sullivan, Bram Stoker, Oscar Wilde, and other Victorian theatre dudes. The latter gave a Holmesian spin to Gaston Leroux's "Phantom of the Opera".

So Meyer delights in weaving nods to great literature into modern narratives. His first directorial success was the time-travel escapade "Time After Time", a fun romp which featured H.G. Wells pursuing Jack the Ripper across modern San Francisco. He takes a similar approach with "Khan", retooling Melville's "Moby Dick" and placing Ahab's lines on the lips of Khan, the film's larger than life villain. A worn copy of the book even appears on Khan's shelf, alongside King Lear and the Bible. In the movie, a character called Spock also gives Kirk a copy of Dickens' "A Tale of Two Cities" for a birthday present.

Several years later, when Meyer returned to direct "Star Trek VI: The Undiscovered Country" (the last featuring the original crew and arguably the second-best film in the franchise) he gave it an Agatha Christie-style "cosy" murder mystery, Shakespeare-quoting Klingons (and a Shakespeare influenced title), named a Klingon prison asteroid after the penal colony that held Captain Nemo in Jules Verne's "20,000 Leagues Under the Sea", and had Spock both quote Sherlock Holmes and refer to the coolly logical Great Detective as "one of my ancestors." Meyers sure does love classical literature.

But woven into "Khan's" cat-and-mouse plot are also meditations that humanise the larger-than-life James T. Kirk. Here, at last, our long-time galactic hero faces the fact that he's not the young space cowboy he used to be.

Early in the film we're introduced to the Kobayashi Maru, a "no win scenario" in which every star ship captain must face death. Kirk, we learn, is the only person to have ever beat this "no win scenario". How? He reprogrammed various computer simulators, thereby changing the rules of the game. As a result, the film has a beautiful tension. On one hand we have the Captain Kirk who repeatedly wins all scenarios, who knows only success, who can't deal with defeat, who always finds a way to break the rules and change the terms of engagement. And on the other hand, we have Kirk's confrontation with his own mortality, his need for glasses, his unscheduled reunion with an ex-lover and his estranged son. This tension, between life and death, immortality and mortality, success and failure, is epitomised by the "Genesis" device, a super weapon in the film which has to power to both create and destroy.

Shortly after Khan's first attack on the Enterprise, which leaves a new crew-member dead, Kirk swallows the bitter pill that his own failures almost brought about their destruction. He goes on to find a brilliant way out of this particular "no win scenario", of course, but the consequences of his escape nevertheless force him to confront the holes in his armour. Our ageing admiral and crew may descend to self-parodying plastic action figures in some later entries, but in this movie they're allowed to be vulnerably human, as themes of pursuit, age, death, and regeneration appear through the phaser fire.

On the other side of the fence, we have Khan. Here's one mightily ticked-off arch villain, quoting 19th century literature and Klingon proverbs while slitting throats and placing space bugs in people's brains. Give him an eye-patch and it'd be "Arrrr! Avast ye!" all the way. Miraculously, though, Meyer keeps it all under control. Even that moody old bird Pauline Kael devoted extra column inches to praising the way these two classically trained actors chewed scenery and bounced off one another in "Khan".

If nothing else, "Khan" reminds us that sometimes, somehow, a Hollywood picture comes along and proves the creaky old notion that talent counts more than production dollars. There's got to be some moral in the fact that the Star Trek movie with the smallest budget (by far) and fewest resources is still the dominant favourite and the only one that doesn't feel, one way or another, like a factory-line franchise product designed solely to provide money for the stockholders.

8.910 - "Khan" has everything you could ask for in a good adventure film: sympathetic, well-drawn heroes, a terrific villain, exciting outer-space showdowns, wow factor, smart direction, a fine tuned script and a touch of reflective depth (the Enterprise crew finally faces up to age and mortality, and questions about the wisdom and consequences of playing God are hinted at).

Jun 3 2017, 11:26
A brilliant spectacle of an action movie, a great piece of sci-fi, a great drama.
Additional Off-Site Reviews: