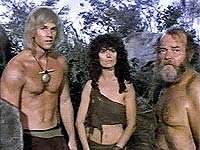 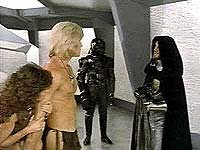 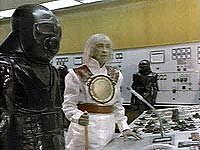 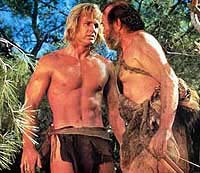 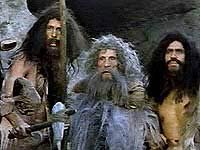 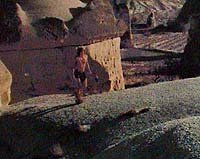 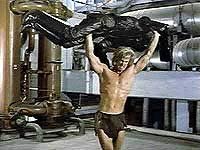 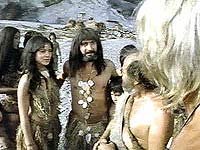 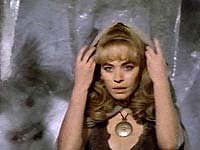 I live for movies like YOR. Even without the Margheriti connection YOR would be high on my list of Coolest Movies Ever. Quite frankly it has everything: Giant dinosaur puppets, hot cave girls with oiled thighs, a funky rock music score, stormtroopers wearing armor made from Home Depot plumbing fixtures, Luciano Pigozzo, and John Steiner. Along with entertainments like KINGDOM OF THE SPIDERS, FORBIDDEN WORLD, OPEN SEASON with Peter Fonda, DEATH RIDES A HORSE, and VAMPIRE CIRCUS, this movie rules, and is almost as cool as even KING KONG VERSUS GODZILLA, though I know that may be hard to believe. Someone should load an old prior rental VHS copy of this onto a satellite & fire it towards Alpha Centauri; we would hear back from them asking for more.

I don't snicker or laugh at this film so much as with it, and in all seriousness am in awe of the execution. What we here in North America know as YOR is actually a condensation of a four hour Italian made for TV miniseries made to cash in on the wild popularity of Mike Hodges 1980 treatment of FLASH GORDON crossed with the CONAN THE BARBARIAN type epics that were all the rage. The series was directed with characteristic gusto by my favorite of the Italian genre film specialists, Antonio Margheriti, a seasoned hand at science fiction, fantasy, horror, Peplum sword & sandal thrillers, Spaghetti Westerns... Margheriti did it all but never quite got the artistic recognition that his colleagues Mario Bava, Riccardo Freda, Sergio Leone, and Sergio Corbucci attained.

Margheriti -- billed here by his frequent pseudonym, Anthony M. Dawson -- had more of a craftsman's approach to his film-making, with an assembly line method of producing them and his fingers on the pulse of the viewing public that resulted in a number films which resonated with international audiences; 1964's CASTLE OF BLOOD, the chilling VIRGIN OF NUREMBERG from 1963, the Gamma One Quartet of science fiction potboilers, and 1978's KILLER FISH with Lee Majors & Anthony Steffen, one of the most glorious mismatches in casting history. Margheriti may not have inspired artistic reverie, but people consistently went to see his films and continue watching them to this day on home video formats.

Margheriti was reportedly a bit chagrined that of all his catalog YOR was probably the most widely seen of his films in North America, thanks in part to the home video era, when a PG rated movie the family could safely watch together was perhaps a more valuable commodity than now. As such a lot of us got to see YOR on home video as youngsters and now maintain a fervent cult of followers as adults. Whoever owns the rights to this film is totally missing the Money Boat in not pushing a DVD re-release, preferably showing both the 90 minute English language edit and the 4 hour Italian print with appropriate subtitles. You will sell many units of this movie, sir. No doubt the rights to the music remain the sticking point in the affair, and that's what lawyers are for. Let them work it out, just get the DVD ready in the meantime maybe.

YOR has some interesting attributes to it as well, shot for the most part in Turkey using some decidedly unique landscapes as backdrops for what is essentially a post-apocalyptic wasteland thriller. Then there is the herd of marvelous, inventive, and oh-so endearing dinosaur creature effects, designed & executed in part by Margheriti's son Edoardo, who would also go on to enjoy a career as a filmmaker as well. Sure, it's dumb to show humans and dinosaurs in the same movie, and even dumber to make the things have to fall over on their sides to indicate they're dead. Must have taken four guys off-camera to push them over, and the stubbornness of their insisting on doing it like that is remarkable.

But then again, what IS a film anyway? It's make believe. Seeing people getting worked up over realism or accuracy in what is essentially a group of grown adults running around with clubs or spears while dressed up like cave people is absurd. It's a fantasy film, and a darn good one at that. The story is confused as we see it in the English language edit but taking the film to task for that is like expecting a less than two hour version of SHOGUN or ROOTS to make sense. It was also a small screen production never intended to have the scope of a STAR WARS or even FLASH GORDON. The target audience was 8 to 14 year old boys watching at home on TV, with Corinne Cleri scampering around in a fur miniskirt for the dads & Reb Brown shirtless for the entire proceeding for whoever else. They even oil Corinne up for some of her scenes and she is a feast for the eyes, especially when a little mad about something. Oooh!

Then there are the outrageous little scenes like Yor hang-gliding to the rescue using a pterodactyl, the trapeze flip climax over the nuclear core, Yor fighting the stegosaurus, and the little jailbait cave girl hottie he is given as a mate after saving her from another dinosaur, begging the muscular hero "TAKE ME WITH YOU, STRANGER!" Twelve year old boys live for movies like this, or rather movies like this will bring out the twelve year old boy within you... Or inspire you to point out that the stegosaurus was a plant eating dinosaur unlikely to be hunting humans, and that just the likelihood of dinosaurs re-evolving after a global apocalypse to live alongside humans is beyond even considering. Or that they can see tanlines on the cave girls from their modern day bikinis & that the Stormtroopers are just wearing PVC tubing with moped helmets.

And I would have no choice but to call you a Fun Wrecker.