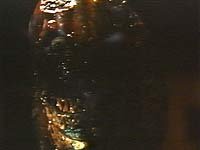 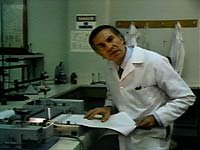 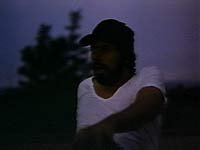 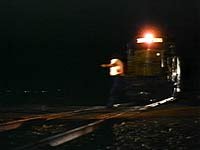 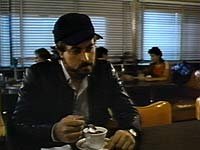 Well, I guess every horror lover must have their guilty pleasures and this is definitely one of mine. The moment I saw the cheesy, generic title grinning out at me from a dirty old video cassette in the dirty, old video shack where I rented most of my stuff from, I fell in love with this film. From the hilariously solemn voice-over narration at the film's opening to the tongue-in-cheek epilogue dialogue at the film's close (proclaming each surviving character's future fate), I enjoyed the hell out of this no-budget monster movie. Despite the fact that the direction is flat, the action lifeless, the acting wooden and the special effects below average, THE BEING is still a largely enjoyable monster movie which serves as a throwback to those '50s backwoods monster movies which still stay in the nostalgist's heart to this day. Take away the brief nudity and gore scenes and the resemblance would be uncanny.

Along with all the problems listed above, the film has further flaws (it's kind of like the runt of the litter - maybe that's why I take pity on it). For example, most of it is filmed at night (the monster only comes out at night, you see - gee, that's helpful for the special effects crew) and many scenes are so damned dark that you have to squint real hard in order to make out just what the hell is going on. This is aggravating. Also, the cheesy monster-on-the-loose stuff was very old, even when this film was made, and all it offers up are clichéd scares and broadcastable shock sequences. There's even one of those damned jumping cats living in a cupboard scare scenes.

It's a definite bad movie all right, but that doesn't stop it being unenjoyable. The first scene in the film has a boy being chased by an unseen menace. He jumps into a car at a scrapyard (which miraculously starts) and just as you think he's escaping, the monster pops up to rip him apart. That's the kind of film it is. This monster attacks a whole lot of people before the credits roll. His next hit is at the local drive-in theatre which seems to be showing a similar movie to this one (except with more gratuitous nudity thrown in for good measure). After filling a loving couple's car with slime in an admittedly spooky scene, the monster rips them apart (offscreen) and pulls another poor redneck out of the passenger window! Amid the monster attack sequences (which take up more than half of the film), we have the typical plodding police investigation. Detective "Mortimer" (I'm not kidding) finds the monster under his bed so is understandably nervous, but that doesn't explain why he talks to himself all the while. It turns out that local scientist Garson Jones is responsible for dumping nuclear waste into the local river, which has in turn spawned the toxic monster. Blah blah, heard it all before. Back to the monster action.

One reason I enjoyed this movie was the cast of familiar faces. Firstly we have Martin Landau (THE WARNING) as the local scientist who creates the monster unknowingly in the first place. I like Landau's haunted performances and here he gives another good one. Also appearing is exploitation stalwart Jose Ferrer as the town's Mayor. Apparently lots of the supporting female actors are famous in America but as I've never heard of them I'll leave it at that. Our lead Bill Osco (acting under a pseudonym), resident Powers Boothe-lookalike and unconvincing action hero, is pretty lousy as the lead, and it's pretty boring to watch him being repeatedly beaten up by the titular menace.

Which leads me to the Being. Now in the world of derivative ALIEN rip-offs this has to be one of the most blatant. The same slimy skin, the same hands, the same bad teeth and the same jutting jaw. The only difference really is that this creature is red. But, although the special effects are cheap and awkward, I like this monster a lot. You see, it has a single human eye which rolls around a lot, which I personally find very disturbing indeed. Even frightening. This is a case where the design of the creature outdoes the execution and actually becomes successful. I have a feeling that most people will hate this movie, and it's recommended to real monster lovers only, but I think it's a blast!