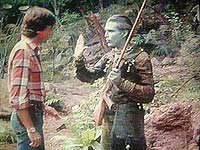 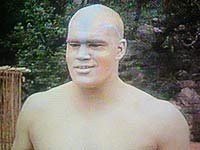 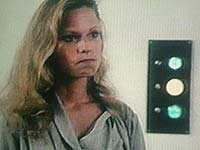 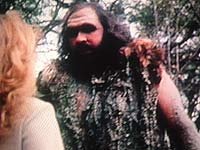 The Story: Feisty girl reporter - aren't they all? - goes to interview a 'mad scientist' who has built a matter transmitter that will enable him to send objects to another dimension. Sidestepping the normal peer review publications he has decided to announce his discovery via a cheesy popular science TV show. On the way to meet him she has a near collision with another car during an earthquake. The other car is driven by a hunky handyman Kendo champion. They instantly dislike each other in the way only people destined to be at it like bunnies by the second act can dislike each other. She continues on to her appointment and meets the scientist. We know he's a scientist because he's wearing a white lab coat - even at home. He demonstrates the matter transmitter using her powder compact and, during another earthquake, manages to transmit himself to the other dimension. The handyman arrives at the house wanting to use the phone and both he and the girl get zapped through to - who knows where.

She finds herself alone in an alien landscape - which looks like Spain but isn't Spain because there are 'alien plants' in the foreground of every shot. She rescues an incoherent giant from quicksand before being attacked by midgets with glowing eyes. The handyman appears and they flee, only to fall over a cliff and be rescued by the giant. (The giant tosses the midgets off the cliff, and as they fall past there is a cartoony falling noise plonked on the soundtrack. Just like the descending in pitch, falling noises that accompanied Coyote on all his canyon plunges in the Roadrunner cartoons. From this we get the first (and only) clue that this movie is supposed to be FUNNY). The plucky twosome get back to the top of the cliff and untie a green man who the midgets had held captive. he leads them to safety but buggers off after rescuing the girl from a 'Waterbeast' while she is skinny dipping. Boy and girl realise they are the leads in the movie and start to kiss before a fade reveals the girl lying in post-coital slumber. He's wandered off for a shave. Local warlord John Saxon arrives with his henchmen and makes off with the girl, leaving the boy for dead after shooting him.

An annoying little twerp comic relief who we loath within minutes but detest by the end of the movie tries to rob the dead body of the boy but - he's not dead after all!... The pair go to buy some horses and rescue the Green man from drunken yahoos.

Meanwhile the girl has discovered the Warlord gets his power (and his guns) from a Sorcerer who is the mad scientist from the start of the movie doing a Wizard of Oz - but with more dead bodies - as if we didn't see that coming from fifteen minutes in. Amazingly he is still wearing his lab coat which has remained incredibly white after a year in a medieval society. He is about to supply the Warlord with nitroglycerin...

After that it's all running through insanely well-lit cave systems fighting off hoards of stunt men without receiving so much as a scratch, running up and down about twenty feet of impregnable fortress corridor again and again passing the same four props endlessly rearranged, and taking it in turns to rescue each other over and over again, until all the bad guys are blown to hamburger and our motley band of heroes are safe.

At which point hero and heroine find her long lost powder compact and for some totally unexplained reason vanish leaving the scientist stranded - presumably they have come back to our own world, but who knows. Maybe they were hoping for a sequel. (Now that IS funny!)

This is hopelessly derivative low rent stuff. Not bad enough to be funny and too dull to be good.