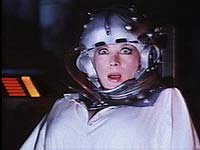 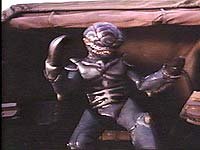 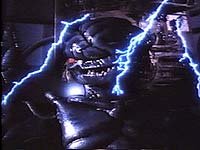 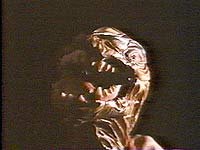 Fred Olen Ray, director of over 150 movies, currently pays the bills making trashy Hallmark-style Christmas movies. While this might seem like an undignified way for such a prolific film-maker to round out his career, I should remind you that there's never been anything dignified about Fred's movies: they've always been trash.

Biohazard, Ray's fifth movie, is a low-budget piece of Earth-bound sci-fi schlock of the type that clogged the lower shelves of video rental shops in the '80s: badly written, poorly acted, with unconvincing special effects, and only really good for a few unintentional giggles if the latest Arnie or Stallone film wasn't available.

The Alien-inspired premise for Biohazard sees a U.S. military scientist using the psychic abilities of his assistant Lisa (Angelique Pettyjohn) to pull objects from other dimensions. The experiment goes awry, however, when Lisa's latest inter-dimensional acquisition turns out to be an extremely vicious creature. What makes this film particularly funny is that the monster is played by the director's five-year-old son Christopher in a crappy rubber costume, meaning that it's about three-and-a-half feet tall and not in the slightest bit scary.

As the diminutive alien runs around the desert killing everyone it meets (which at least results in some cheap and cheerful gore), heroic military man Mitchell Carter (William Fair) and Lisa try to track it down, pausing only for a quick fumble on Lisa's couch (which allows Pettyjohn to free her impressive puppies). Olen Ray pads out his film with assorted characters whose only purpose is to be killed, including several hobos, the town drunk and his wife, and a guy called Roger (Richard Hench), whose busty blonde wife Jenny (Loren Crabtree) just so happens to be taking a bath. Unfortunately, there's quite a lot of filler in the form of dull conversation as well.

Like the films of fellow trashmeister Jim Wynorski, Biohazard isn't intended to be any kind of masterpiece - which is good, 'cos it's not, as evidenced by a very silly ending that shows that Ray had no idea how to wrap things up in a satisfactory manner. Still, the sight of Pettyjohn tearing open her breasts and head to reveal that she is a monster is wonderfully wacky, and the end-credits out-takes are quite fun.