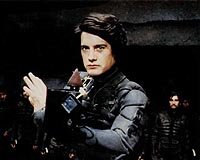 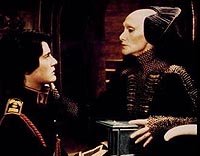 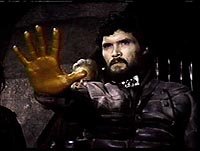 This is without doubt a more than ordinary science -' fiction movie. The defining factors here are the complexity of the story and of the characters. Indeed as the Guild Navigator mind read the Emperor 'I see plans within plans'. On first viewing, one may be 'Lost In Translation'. There are a lot of reasons for this. The first, as previously indicated, is that the story is an involved one. The second is that in trying to adapt a story from an immense novel, editing may leave out aspects that will clarify certain points in the story. The last one belongs to the Director -' David Lynch. One of the best he may be, but also one who likes to tease audiences with bizarre images. 'Dune' gave him ample opportunity to indulge. The fantasy aspect of the story meant that the character list was a tongue -' twisting affair. We have among others, Reverend Mother Ramallo; Usal Muad'dib; Gurney Halleck; Padishah Emperor Shaddam IV and Feyd -' Rauta. Try saying that all in one go. But these complicating factors are also its endearing qualities, especially the mind -' boggling story. Indeed it promotes its longevity. Although not a movie for everyone, fans will find themselves drawn into the web of deceit and the beautiful, cruel world of 'Dune'.

There are a number of others aspects underlying the movies appeal other than its story. The grand sets, solid performances and special effects contribute greatly to the spellbinding affect. It is this combination of factors that, for me, make it stand out amongst the remake. I thought it superior to the mini -' series in almost all departments. Even when taking into account the natural preference one may have for seeing 'Dune' before the series, I still stand steadfast by my opinion.

As mentioned, the storyline is the factor that makes it the most unique sci -' fi movie that I have seen. The hero's journey is a perilous one wrought with obstacles the likes of which have never been seen before. We have a psychic fraternity of women; a cruel and repulsive opposing family; a tangled web of deceit and, of course, the worms. Let's not forget the terrain that the worms inhabit. Not a drop of rain has fell on Arrakis. There are so many movies revolving around the unlikely hero who rises to become the one, the messiah. But as in 'The Matrix', this is not noticeable. The originality of the world that the characters inhabit and the events that pull them together in the quest for the power to control the universe, entices you in beyond the predictability giving you a thrilling journey.

The sets are at times breathtaking. Not only do they appear realistic, even by today's standards, they also accentuate the nature of the characters. The opening scenes with the Guild Navigator and the Emperor show a set which displays an aura of power and wealth. A palace thus befitting a ruling monarch. The Guild Navigators craft and the holding tank for the 4th stage Navigator is indicative of the ominous and twisted beings that they are. The spice Melange has done them no favors' as far as appearance goes. House Harkonnen resides in a dark and foreboding place created to indulge their disgusting way of life (please note the drain). The craft they possess is of an imposing nature. Robust and crass thus mirroring their character. The set for the House Atreides creates a sense of opulence and taste. It is indicative of a noble family in the 18th century. The contrasting sets for the enemies distinguishes them into distinctly good and evil. A lot of hard work was put into the sets which paid off tremendously as the world of 'Dune' was bought to life for the big screen.

The ensemble cast was superb and it was obvious that everyone was taking the movie seriously. Kyle Maclachlan was solid as Paul Atreides. Jurgen Prochnow as always plays the leader with his own cool quality. There is also a notable appearance by Sting who seemed to relish the opportunity at playing a bad guy. The star performance must undoubtedly go to Kenneth Macmillan who played the Baron giving us a reminder of a character we first encountered at school -' Richard III. The audience can also sense the fun he has with the role which does not detract from the evil nature of the character. The audience would have believed that the Baron was a twisted man who wanted to destroy all that is beautiful since he was afflicted with a disgusting ailment. This portrayal was not achieved in the TV series which gave us a more unbalanced character on the side of comic relief. The movie gave us a Harkonnen which was a far darker breed thus posing a far greater obstacle to our heroes. Although we see more of the characters in the series, the image of the maimed and disgusting Harkonnen of the movie is the one that lingers.

The special effects were noticeable by their weaknesses in a few scenes, but this is through the eyes of someone attuned to the special effects of today's movies. At times the characters seem to be copied and pasted onto scenes. The shields certainly looked fake. But on the whole they were still better than the series, especially the Worms who exuded a far greater power which was accentuated by the natural elements in the form of lightning. Indeed a memorable touch. The TV series was more elaborate but only succeeded in magnifying the fakeness.

Another interesting point involves the use of voice -' over as a method to give the audience a deeper sense of the story when we learn of characters inner thoughts. This adds to the surreal effect of the movie which may or may not have been intended. The initial intention was probably to try to tap into the multi - layered story that 'Dune' is and bring this translation to the big screen. I believe that it assisted the fantasy aspect of the story more than the insight that was intended.

I have to agree with other users here that the ending does not do just to the slow, methodical build -' up of the movie. It needs about 15 -' 20 minutes extra to heighten the climatic scene and to not feel that we are being briskly guided to the exit door. However, there was a problem of choice since the movie would have been deemed to be too long. But the end choice did leave a gap creating a desire for another production which evolved into the TV series.

Sci -' fi has a mass appeal which rivals that of the action genre. We have a deep desire to explore the unknown and the advancement of technology does not satiate this, it exasperates it. Therefore the space travel and aliens has a certain resonance for us as the world becomes smaller and our natural boundaries are less inhibiting. It is so easy to learn about ourselves and the world around us, that we neglect this as we look further. The sci -' fi movies address these fantasies and 'Dune' succeeds sublimely. It may not be the most popular, it may not be one of the best, but it is certainly one of the most sophisticated. If you are looking for a sci -' fi movie outside the norm, 'Dune' should pose to be no disappointment. .

Review by Stephen West from the Internet Movie Database.