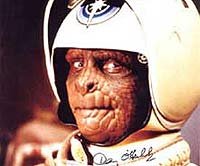 I was a kid from the 80's I love both sci-fi and video games, just seeing the combination of both of them was a dream come true for me, because this film was practically the best of both worlds.

Yeah this is another under the radar gem from the 80's I'm fond of and was part of my childhood. It's true it's not a deep sci-fi, it's not trying to be but it's really just a simple wish fulfillment fantasy and there's nothing wrong with that I like those kinds of stories because their built to make you feel good and that anything is possible. These kinds of stories and films I don't see much anymore, which to me is part of what makes the film special. But I just love the idea that a video game is actually a test to join an organization to stop an intergalactic threat, that's cool. It's like if the video games "Halo", "Mass Effect" did the same thing heck may'be "Double Dragon" where that's a test to join some ninja organization to stop a crime wave, well you get the idea.

I love the score for the movie, the theme song is one of my favorite themes ever, it has just that epic heroic tune to it. The special effects are great, from the make up work on the aliens, the practical sets of the interiors of the starships as well as the designs of them. But the best effect of all was the CGI, this film was the second along with the film "Tron" to combine both live action with CGI. I still think it's holds up rather well (at least I think so) because you really sense the effort and care they put into the production, I feel this is one of the best examples of CGI as well as big budget and effects in general used the right way for the right reasons.

I really like the design of the Starfighter, just seeing how it worked made me want to drive one. The best feature for me was the death blossom, it kind reminds me of most of those shooter games like "Raiden" just when your ship is overwhelmed with opposition your simply nuke them as a quick solution.

Another use of the CGI was in the Starfighter arcade game literally made. The film wasn't just groundbreaking and ahead of it's time in the effects dept but also in development and design of video games. Just seeing that game Alex was playing blew me away because at the time I've never seen video games look anything like that and really made me wish that the video game existed, they actually tried but it didn't happen.

My favorite moment with the video game was when almost everyone in the trailer park was seeing Alex beat the game and their all getting excited. It reminds me of the crowds getting excited in those video game tournaments in conventions. Yeah I know small victory to cheer for but small victories I always believed were good signs that added up to big victories in the future.

I really like the cast from the supporting characters like the late great Dan O Heiliy whom plays the lovable Greg, like the make up work on him sort of an evolved reptilian only pleasant looking. As well as the late great Robert Preston as Centari he puts on that same silver tongued persona he usually plays but it's just fun and funny to hear because just the speed and execution of his deliver is music to my ears.

But it's really two of the main characters that drive the film. Catherine Mary Stewart whom was one of the first actresses I had a crush on as a kid, she's hot and a capable actress it's a shame she didn't get more stand out projects. But anyway like her character Maggie she a solid significant other, a typical girl likes having fun, supportive, but she is insecure in some way because she does desire more like Alex but is unfortunately reluctant to leave.

Lance Guest is great as Alex, shame this actor also didn't have more. I really like Alex, the character is a lot like myself when I was his age. He's kinda a geek, I mean that in a good way. He likes sci-fi and video games, he has desire to leave his neighborhood and have an adventure. But he's also kinda an underdog, he's a kid that really isn't with the popular crowd, he's not rich, and he doesn't have the best luck from his responsibilities to deal with that really cut into time with both friends and girlfriend, but also having trouble getting into a good collage that to him is his ticket out of town. You really want this guy to get everything he deserves and he gets them in more ways than one. I really like how he reacts once he shipped into space it feels like how anyone would react, he's reluctant at playing the starfighter role at first because it wasn't exactly what he had in mind at first but it grows on him as things go on and it's believable it's sort of the rite of passage principle.

The only miss of the film for me is the subplot with the fake Alex, that by it's nature I felt was filler and some of the humor in it doesn't really work. But this is a small miss, there's really not many minutes of it so it flies by.

"The Last Starfighter" it's not a masterpiece but all the same it's a lot of fun because it has the rocket power, fuel, and heart to make it fly high.

Review by hellraiser7 from the Internet Movie Database.