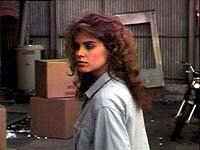 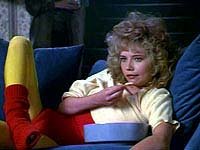 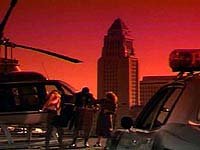 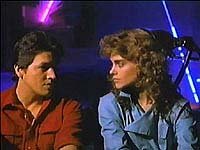 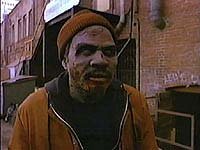 If you've seen any film such as The Day After, The Stand, Armageddon, Independence Day, or even the recent extravaganza The Day After Tomorrow, the end of the world would seem to be pretty serious business for us to have to deal with sometime down the road. Film directors one and all want us to believe it's all doom and gloom what with asteroids zooming around haphazardly in space, aliens needing to ravage us and the planet, global warming screwing up the weather or some deadly virus escaping some government lab infecting mankind with a super flu. Thom Eberhardt doesn't quite find it such a dreary proposition, and in fact finds quite a bit of humor in the situation by way of telling the story of two of the survivors, teenagers Reggie Belmont (Catherine Mary Stuart) and her sister Sam (Kelli Maroney).

Somewhere out there in the final frontier where no man has gone before, is a comet zipping around with nothing better to do but to pay all of us here on earth a quick friendly visit. No, it doesn't exactly have earth's name on it, but it does want to take a cue from Top Gun and do a major fly by just so it can get up close and personal. Of course since we're a partying kind of planet, we decide to have one big planet wide comet festival just to welcome it into our solar system. There are comet tee shirts, comet hats, people have comet barbecues, and everything is just one big comet celebration. One of these comet parties is being held by Doris Belmont, wicked step monster to Reggie and Sam. Reggie and Sam's father is off doing army duty, and it's left up to Doris to keep the two girls safe and out of trouble, or as in Doris's case be a first class bitch while screwing the next door neighbor on the side. After an argument with Doris, Reggie ends up in a projection room at a local theater, and Sam ends up.well more about that in a moment. Eventually the comet does pass overhead, and being the grateful kind of comet that knows how to treat its host, it leaves us all a present by turning the vast majority of the human population into orange pixie dust.

Of course, if you happen to be one of the very lucky few, like Reggie and Sam, you may have survived. It turns out if you were in a dwelling of some sort completely encased by steel, then you also woke up the next morning to see the dawn's early light. Reggie, having spent the night in the theater projection room which just happens to be steel lined, does survive. Sam, who found herself somehow spending the night in a trash dumpster survives also. However, if you were only partially protected by a steel enclosure, then you only get to survive temporarily which also means you get to play zombie for a while before you disintegrate into a pile of dust bunnies. Then there are those scientists who were aware of the danger but instead of warning us all to momentarily hop into our Kenmore refrigerators, they built themselves a huge enclosure to protect themselves with. So not only are they extremely selfish scientists, they are also straight out of the Fred MacMurray School of Absent Minded Professors because although I'm sure they wear their seat belts and lock their car doors, they somehow forget to close the vents on their Comet Proof Bomb Shelter. What that means is they need to track down Sam, Reggie and other survivors who may pop up here and there in order to find a cure before they have to begin their own auditions for George Romero.

If it all sounds kind of goofy and wacky it certainly is all of that. Early in the film, you may have a bit of trouble buying into the proceedings but you'll eventually be seduced by the perkiness and charm of Stuart and Mulroney, and the witty dialog that inhabits Eberhardt's script. For instance, when Reggie returns with an arsenal to fight off zombies, Reggie complains that, `Dad would have gotten us Uzis'. And what are two teenage girls to do when faced with the apocalypse? They play D.J. on the only radio station still broadcasting, they vie for the affection of the only guy available, and they lift their spirits by going shopping at the mall to the music of Girls Just Want to Have Fun. As for special effects, they aren't much to speak of but we don't care because it's the script carrying the film anyway. It's obvious that Eberhardt was working from a somewhat miniscule budget, and although there are a few scary moments when Zombies pop out of nowhere, it's the whole premise of two Valley Girls trying to survive in a desolate Los Angels while being chase around by monsters and evil scientists that will win you over. It's obvious from the narration in the opening moments that this is a B movie, but Eberhardt keeps things on track by never taking himself seriously or asking us to which is a major requirement in a film of this nature.

Night of the Comet is not currently available on VHS or DVD. You may catch it on Cable at some point if you don't own it. Your only other alternative is to purchase it on Ebay at your own risk. I was lucky enough to have taped it some years ago, and am glad of having done so.

It takes an offbeat sense of humor to make a film like Night of the Comets and have it succeed as well as it does. It takes a quirky sense of humor for someone watching it to appreciate the film for what it is: a cheesy plot-hole ridden B movie, with a lot of odd but good natured humor and with two lead actresses that are good enough to take us along for the ride. I bought it, hook, line, sinker, cheap special effects and everything else that went with it. And if I can buy into all this I have no choice but to give you my grade which for Night of the Comet is a B. Now excuse me for a second while I go check out the vents on my comet shelter.

Review by clydestuff from the Internet Movie Database.