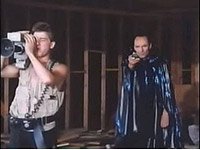 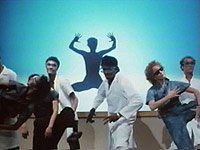 Strangers in Paradise is a lost classic which deserves its place in the pantheon of B-grade musicals right next to Can't Stop the Music and The Apple! The film is about a Wiemar era hypnotist who goes into cryogenic suspension in order to escape Hitler only to be thawed out by an ultra conservative political party who use him to further their own agenda.

Most of the story is told in musical numbers, and no 80's genre is left unsullied! Devo style art-rock, hair metal, and pretty much anything that was on MTV in 84' is trotted out, often with unintentionally hilarious results. My VHS copy of this is the pride of my bad musical collection.

Review by Tura23 from the Internet Movie Database.