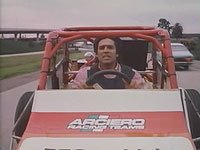 Once again I commend the Italians on making a bad film in the most awesome way possible! They find something of ours and totally turn it into a crazed movie that is bad, but so dang entertaining! I mean in the first five minutes of the film we get a couple making out, boobs and a laser that melts the cute couple like the Nazi dude at the end of Raiders of the Lost Ark! That is how you open a movie, and they know how to end it as we the viewer do not have to go through a recap or lighthearted scene, no we just get credits as the hero stands triumphant with his awesome magic dune buggy!

The story, well, after that train scene shifts to a violent bank robbery or something and Eric Estrada is sent in and he kills! Soon the developer of the light blast thingy demands money or he is going to use his weapon! His target in all of San Francisco? Some random stunt car show that looks to have drawn only a quarter stadium full of people and where the people operating the light blast thing can be easily seen! Hell to the yeah as we soon get a chase with random explosions! Can Eric stop this deadly attack upon San Francisco? Absolutely not, as the makers of this film could not be stopped from making a film in San Fran without a permit so Eric just joined in and stopped the bad guys of the movie!

Seriously, the film is bad, but so great at the same time. Eric Estrada does a good job and has charisma as the lead even when he just blasts a woman in a morgue who we later find out was the bad guy's wife. Didn't know that at the time when he dusted her! I see B films get these dudes who are nobodies but have big muscles all the time and they totally suck compared to Eric in this film!

So, if you want to see lots of action, some blood and guts and some cool chases...this film is for you! Just do not question it as the villain wants five million dollars or he is going to blow stuff up, but with the weapon he has being a new thing, he could get more if he just offered to sell it to the highest bidder. Eric Estrada steals a dune buggy to go after the bad guy at the end and the thing literally jumps two cars randomly and Eric must battle the dude who looks as though he was the actor used to model for Brawny Towels too! Just crazy and lots of crazy stuff happening, but give me this over an American bad film any day!