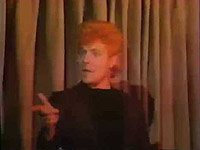 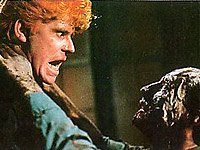 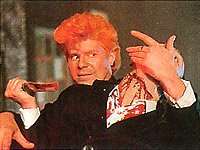 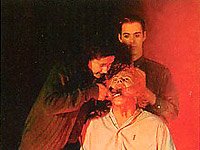 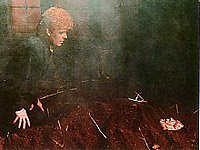 When I first watched The Comic a year ago I dismissed it in my mind as 'a turd'. But I think I may be wrong. The Comic, after having lived in my head for a year, and on another viewing, is, possibly, the greatest undiscovered work of genius film-making produced in Britain since the Sixties - that or a sustained display of amateur ineptitude which, just by being so incredibly crap, manages to completely bypass any form of criticism.

With most bad films you have some idea what the film was trying to do: it's an unfunny comedy, it's a not scary Horror film, it's an unthrilling thriller. With The Comic you don't have a clue. I really haven't got any way to start to work out what the film thought it was other than to liken it to other films which it resembles (slightly - and then almost certainly by accident). Plot-wise I think it's the rags to riches and back again, rise and fall story (think David Essex in That'll be the Day Stardust) but set in an authoritarian future where jackbooted militia can beat the crap out of people in public for no real reason, then throw them in gaol without trial, and the highest form of culture appears to be the working man's club circuit. It's obviously heavily influenced by David Lynch's unfiltered stream of unconsciousness imagery; uncomfortable, grainy, double-framed shots of nothing much happening are sustained beyond any sensible length. At the end of the film several of these, seemingly totally unrelated shots, are repeated as if they are DEEPLY SIGNIFICANT. There are nightmaredream sequences with the smoke machines pumping away so much that, at times, it's hard to figure out what is going on on screen.

The cutting jolts all over the place leaving audience confusion in its wake - for most of the film I had very little idea of where any of the 'action' was taking place; apart from a shot of some boats in a harbour and a couple of establishing shots of a big house all the film takes place indoors - even the scenes which are obviously meant to be outside feel like interiors. (Mostly down to the crappy sound work.) The setting is weird too, the street (shot in what appears to be some sort of living museum heritage centre) is knee deep in straw. The rich get about in horse-drawn carriages or vintage auto-mobiles. The protagonist's 'flat' consists of one ground floor room with a door that opens straight onto the street and has shop windows - and some of the worst wrinkled wallpaper-hanging I have seen. A metaphor maybe for all the many layers of meaninglessness on display? A thin covering to be peeled away to reveal even shallower layers of meaningless beneath? And just why does the protagonist's mullet change colour from yellow to orange, then back again, quite so often? What was that grainy, sepia-toned flashback to the granny getting her throat slit by total strangers all about? Who is the whore in the red dress and what has she to do with anything going on in the rest of the film? Why does the hero pay for his daughter to be smuggled out of the country with a small bag of undefined something like a character from a historical movie? and why doesn't the smuggler look to see what's in the bag? - it could be toenail clippings for all he knows! Why is 'the comic' at the centre of the film so incredibly bloody unfunny? the only really funny stand-up delivered joke of the whole film comes from a character we have never met before (and never seen again) suddenly appearing mid-frame to deliver a seriously surreal gag before vanishing from the movie. What. Is. Going. On? This sort of thing keeps me awake at night.

I think producer writer director editor sounds effects arranger Richard Driscoll was trying to do something very simple - an SF reworking of Dostoevsky's Crime and Punishment in the northern Working-men's club circuit - but somehow, accidentally, managed to make the most accurate, sustained, parody of every bad, overly-arty first year Film Student movie ever produced.