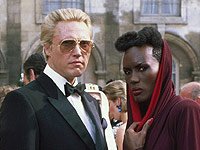 With 1983's Octopussy having won "the battle of the Bonds" at the box office at least, work began on the next big screen adventure for James Bond. Roger Moore, now in his mid-50s, had tied with noted predecessor Sean Connery in doing six Bond films for EON productions. Moore though would do a seventh, and film, Bond film at the age of 56, 1985's A View To A Kill. In fact, it's thankful that it was him and not a new actor playing the role. If that had been the case, Bond might well have come to an end in the mid-1980s thanks to the worst film of the series.

Looking at the film, it's clear that Moore was well past his prime in this film. Moore would seem to have aged quite a bit in the couple of years between making Octopussy and this film. He looks much older and not in a good way like when Connery returned to the role in Never Say Never Again. Moore looks laughably out of place as Bond be it in the action scenes (where he isn't clearly being doubled that is) but especially in scenes with his much younger female costars. It also doesn't help that Moore's performance is little more than the actor effectively sleep walking through the film, with little or no emotion present throughout. This is Moore at his worst as Bond.

The film's cast doesn't improve from there sadly. After a series of stronger female characters, Tanya Roberts as Stacey Sutton is nothing short of a letdown. The character is a damsel in distress, who can do little more than scream and shout "James!" every so often. The character is poorly written and the performance of Tanya Roberts does the character no favors either as she goes for over the top every chance she gets. What we're left with is another worst: worst Bond girl of the series.

Over the top doesn't begin to describe the film's villain Max Zorin played by Christopher Walken. Walken doesn't seem to take the role seriously at all from the moment he appears on the screen to the moment he thankfully exits the film. Walken plays Zorin with zero menace and instead plays up the insanity of the character by laughing manically almost every time he appears on screen. This was presumably for dramatic effect but instead makes the character utterly laughable and ridiculous. The result is a villain who is never threatening and a waste of an actor's talents.

The supporting cast is mixed as well. Grace Jones as henchwoman May Day is even more over the top than Walken's Zorin with the result of being more annoying than threatening. The character is further ruined by a plot twist late in the film stolen out of an earlier Bond film (more on that later). Other villainous characters such as Patrick Bauchau's Scarpine and Willoughby Gray as a former Nazi scientist are little more than clichés on legs throughout. Other members of the supporting cast fare better though. Patrick Macnee as Sir Godfrey Tibbett gives what is perhaps the best performance in the entire film even though his character is all too often played for laughs. Also of mention is Lois Maxwell who plays Miss Moneypenny for the last time. Maxwell, like Moore, is well past her prime in the role but her exit from the series does little to mark her more than two decade long contribution to the series. The supporting cast is mixed though it does serve the film well in places.

Moving into the production values, the film's other faults come into focus. The film's action sequences are played for laughs such as the snowbound teaser sequence (ruined by the use of a Beach Boys song) to the car chasing parachutist in Paris (further ruined by very, very obvious doubling of Moore) and most obviously in the fire truck chase through San Francisco. Other action sequences come across as uninspired, especially in the fight scenes at the Sutton house and the climatic fight on top of the Golden Gate Bridge. There is also increasingly obvious doubling of Moore in every single one of these sequences which detracts from the film itself and believability in its star. That isn't where the film is hurt the most however.

Nothing lets the film down more than its script. The script does little more than rip off previous Bond films in a vain attempt to create something original. In particular, Goldfinger is effectively pillaged. There are horses, there's a plan to destroy a sizable chunk of the economic wealth (Fort Knox's gold in the previous film, Silicon Valley and its microchips here) to make the villains stockpile of said material all the more profitable, a last minute change of heart by a woman connected to the villain which derails the plan and an underwhelming final climatic fight between Bond and the main villain. For that matter, there are scenes in the film which seem ripped out of Goldfinger with a few changes to dialogue. The film's plot also unfolds with too much coincidence and ease and the dialogue is cringe worthy throughout. The result is the worst Bond script yet written.

There is only one word to describe A View To A Kill. That word is uninspired. Worse than being uninspired though, is another fact about the film: that is the worst of the series. From an over the hill 007 to poor casting, a returned emphasis on humor and a script that did little more than rip-off the previous triumphs of the series, the film feels like a parody of the series rather than being a proper film. If not a self- parody then perhaps it is a film that steals from the past to create a film that merely goes through the motions of a formula. The result is a disaster and a clear mandate for a new Bond to take charge.