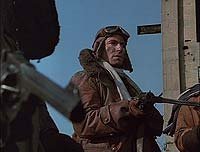 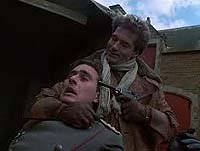 Cards on the table time - I have not read the 'Biggles' books by Captain W.E. Johns. I remember seeing them on sale in the children's book department of W.H. Smiths back in the 1970's, but never plucked up the courage to actually buy one. I was more into the 'Nick Carter - Killmaster' novels. I assumed the 'Biggles' books to be jingoistic relics from the days when England was alleged to have ruled the waves ( and skies ), the sort of stories Grandad read as a boy. But that was then.

Around the end of the decade, a feature film was mooted, starring John Cleese in the title role. Though it would have been interesting seeing the star of one flying circus in yet another, it never happened. Dudley Moore's name next came up in connection with the project. Fine if they wanted to send up the character, but not for an allegedly straight adaptation. Appearing on Granada's 'Clapperboard' to talk about the Robert Powell version of 'The Thirty-Nine Steps' ( which he had adapted ), writer Michael Robson stated that he was currently working on a screenplay for 'Biggles'. As he said it, he looked faintly embarrassed.

The problem in bringing 'Biggles' to the Silver Screen was that the character ( indeed the genre ) had been sent up rotten over the years by, amongst other things, 'Monty Python', 'Ripping Yarns', and Russ Abbot. Just put a comedian in a World War One flying suit ( with goggles ) give him a handlebar moustache, make him talk thus: "Wizard Prang! What larks! Shot down two Fokkers over the Channel. One did a belly flop over the teddy bear!" and the audience would be certain to die laughing.

In 1986, a 'Biggles' movie finally appeared. The writers decided to bring in a sci-fi element in an effort to grab some of the 'Back To The Future' audience. It starts in the then-present day with Jim Ferguson, an ad man based in New York, who is being stalked by a mysterious Englishman, Colonel Raymond, played by the great Peter Cushing ( in what turned out to be his last role ).

Ferguson keeps jumping back in time for no apparent reason, to 1917, where he meets flying ace James Bigglesworth, or 'Biggles' for short. Biggles has discovered that the Germans have invented a new sonic device capable of mass destruction.

So back and forth goes poor old Jim. One minute he's in N.Y. extolling the virtues of T.V. dinners, the next up to his neck in blood and mud in W.W.1 France, working alongside Biggles, who apparently is his 'time twin'. In one amusing scene, Jim dresses as a W.W.1 soldier and waits in his hotel room to be blasted back to Biggles' side, but it never happens. A cleaner finds him the next morning and laughs at him.

Neil Dickson is not on screen enough of the time to warrant his top billing, which is a pity as he's terrific in the role of 'Biggles'. Most of the film is devoted to Alex Hyde-White ( son of Wilfrid ) as 'Jim'. He's okay, but I wish that the focus of the story was more on the title character. The action scenes, while not as good as those of say 'Raiders Of The Lost Ark', are nevertheless exciting. One particularly good moment has a helicopter containing Biggles and Jim winding up in 1917, where it comes in handy against the Germans. There's also a very emotional scene in 1986 where elderly Colonel Raymond is reunited with Biggles, the latter not having aged a day since they last met.

Overall this is an enjoyable romp, but it is a shame that its makers did not have the confidence to make this a real 'Biggles' movie, instead of trying to shoehorn him into a daft sci-fi story. Ironically, the 1917 scenes have dated far less badly than the 1980's stuff. The rock soundtrack was another mistake.

The director was John Hough, whose other credits include 'The Legend Of Hell House' and the Hammer movie 'Twins Of Evil', as well as episodes of 'The Avengers' television series.

'Biggles' was dumped on by critics and ignored by the public when it came out, but now seems quite charming. Interestingly, around the time of its release, I spotted a young boy coming out of a library with a heavy looking book - an omnibus edition of 'Biggles'. If the film, for all its faults, inspired someone to seek out and read the original stories then it could not have been a waste of time after all. I may give them a go myself one day.

Review by ShadeGrenade from the Internet Movie Database.