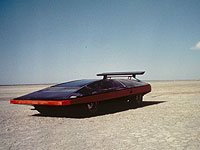 Nothing new in this generic and almost lifeless picture who owns its good moments thankful to the charismatic Tommy Lee Jones, who plays the thief hired by the FBI to steal vital information about a corrupt company. It all complicates when he's followed by the company's security after stealing the info which was hidden in a supersonic new car, object of desire of another thief (Linda Hamilton) who works for another corrupt company, commanded by a powerful businessman (Robert Vaughn). The goal is to take the car and the info out of it, and escape the bad guys who are always on his way.

Even having John Carpenter as a writer of this film, "Black Moon Rising" doesn't fly high in ambition. But it's more of a direction problem (Carpenter is not commanding this but it's unknown Harley Cokeliss who's behind this). It offers moderate action sequences that aren't vivid in the memory for too long - the car chases have their qualities while the fight scenes seem a little exaggerated with everyone fighting karate style instead of a more street level kind of fight, something in which we would believe more if seeing characters like those (robbers and security staff members) doing it. The only real exciting part was when TLJ crossed the two towers, a breathless scene that makes it all the while of going through dramatic conversations and some flirting between Hamilton and Jones, somewhat humored but created without interest for us in the audience. The story just wasn't important. Good for some snores in between.

Why I liked it? Well, Mr. Jones was the man here. Always great and with an unique sense of humor, he makes of this a good entertainment with this good-hearted robber who even has time to teach young beginners in the field, as exemplified right in the first scene. Typical case of a movie where the actor carries the whole movie on his back and succeeds. And it was good to see Bubba Smith doing something outside of "Police Academy", here he plays the FBI agent who commands Jones mission. Oh the car! It was fun to watch, it's really fast and sparks some fire but it's no Batmobile or Kit the supercar.

It was OK. Passable, destined only for those really interested in classic adventure flicks from the 1980's.

Review by Rodrigo Amaro from the Internet Movie Database.