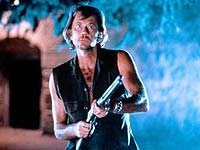 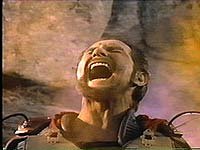 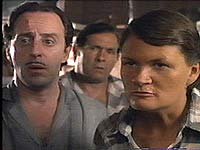 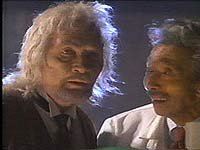 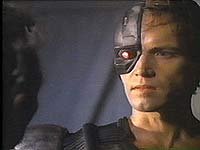 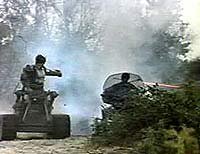 You just can't lose with the wacky PG-rated nonsense in this irresistible, campy genre picture. It knows full well that it's a B movie, but the cast and crew were clearly having a fine old time, and that feeling is infectious. The story has a "let's throw different kinds of ideas into the mix and and see how they hang together" appeal. The result is a harmless diversion with a lot of humour and a fair bit of action. The actors play it for all that it's worth, to be sure.

Our four character heroic team is made up of Harry Fontana (Andrew Prine), a charming rogue of a river guide, Nora Hunter (Denise Crosby), a young scientist, Kuji (Conan Lee), a ninja, and a "mandroid" (Patrick Reynolds). The mandroid used to be a pilot before a power mad villain, Abbott Reeves (Roy Dotrice) got a hold of him and turned him into a half-man half-machine experiment. Now the mandroid has escaped and wants revenge, first seeking out Nora who then hires Harry to transport them through Mexico to Abbotts' lair.

As written by the reliable team of Danny Bilson & Paul DeMeo and directed by Peter Manoogian, "Eliminators" should prove to be quite a hoot for kids of all ages. As said, it's pretty harmless. The youngest members of the audience should take to "Spot", a cute surveillance robot created by Nora. It's hysterical when the neanderthals are introduced into the plot. As it turns out, good old Abbott was messing around with time travel. Just wait until you hear what his ultimate goal is; you may howl with laughter as this viewer did. Sex and violence are kept to a minimum; note that future 'Star Trek: The Next Generation' co-star Crosby has a scene where she removes a wet top, but does so with her back to the camera.

The cast is a pleasure to watch. Prine is an interesting choice for the lead; originally Tim Thomerson was meant to play Harry, and one can easily imagine Thomerson in this comedic role. Crosby is appealing, and Reynolds and Lee are okay in their parts. Dotrice is an entertaining bad guy, and further antagonism comedy relief is supplied by Bayou Betty (Peggy Mannix), a butch competitor of Harry's.

One can see early on that this is never meant to be taken too seriously, and this extends all the way to the final shot, an absolutely hysterical "freeze frame" moment.