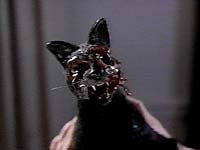 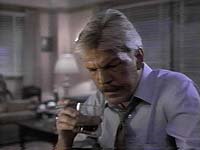 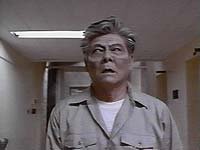 Night of the Creeps marked the directorial debut for Fred Dekker and the one thing I can say is the genre truly is missing Fred Dekker. This rates as one of my favorite directorial debuts and by the time Night of the Creeps was released horror was still going strong, but we were seeing a slight decline in quality. What was working in the early part of the 80s wasn't working as well, which is partly the reason comedic horror flicks were being made more and more. But really by this time in the genre the slasher film was really all, but dead and even zombie movies were lacking, but with Night of the Creeps Fred Dekker made an excellent zombie flick that stands-out from the others that populated the horror genre at this time.

For a low budget horror movie the acting is actually fairly strong from the main cast. Normally movies like Night of the Creeps even if enjoyable have weak acting, but this movie actually has some solid acting. Tom Atkins as Detective Cameron is excellent like always. Seriously is there an actor cooler than Tom Atkins? Steve McQueen might be known as the king of cool, but Tom Atkins can seriously give him a run on that. Atkins has stated Night of the Creeps is his favorite of all the movies he's done and I'd happen to agree with that. Jason Lively as Christopher Romero and Steve Marshall as JC are both very good in their roles and Jill Whitlow is solid as Cynthia and is total hotness as well.

Fred Dekker actually writes a very good and creative screenplay; by the time of the release for Night of the Creeps there were still many great horror movies released and many great ones after Night of the Creeps, but at this point of the genre there was a slight decline, but Night of the Creeps is a great example of great horror. Many movies in the 80s focused more on the gore than the characters and Fred Dekker is able to do both. JC and Chris are two of my favorite characters of all time and they are both highly likable and the bond between the two of them feels real and never comes across as sappy with the exception of maybe a scene or two. And the love story angle between Chris and Cynthia also really works well and adds a lot of depth to the characters and the movie. Like I said the comedy really works well and anything Tom Atkins says in the movie is so quotable. Night of the Creeps is one of those movies you can quote over and over again.

Directing wise Fred Dekker really delivers on his debut film; the pacing never once lags and is always moving forward. The comedy works well and it really is quite funny and there is some decent suspense. Fred Dekker is obviously a fan of the horror genre, which is really clear as he uses names such as Hooper, Carpenter, Romero, Cronenberg, Landis, Raimi and Cameron to name a few. Night of the Creeps is very much a homage to the horror genre from the 50s all the way up until the 80s, but with Night of the Creeps despite the homage's, Fred Dekker also puts his own twist on things, which by this point in the horror genre was rare. A lot of movies at this time were nothing more than cheap knockoffs even if they were enjoyable, but Dekker puts his own twist on things and possibly makes the coolest movies of the 80s or of any era for that matter.

Night of the Creeps is just a blast to watch and like I said seems to get better and better with each viewing and again the movie is so quotable. Night of the Creeps never fails to put a big smile on my face. We got a solid plot and some really awesome and likable characters, which again by this time seemed rare.

Review by The_King_of_Cool from the Internet Movie Database.