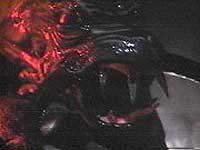 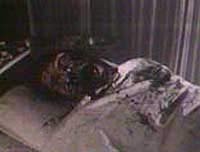 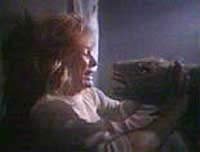 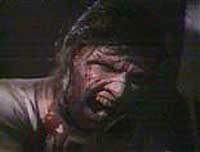 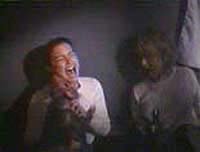 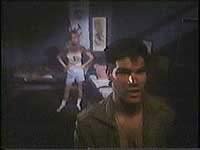 I got this movie just because of the name and assumed it would be a typical bad/campy B-movie. Let me just say that this goes WAY beyond just that! The first half of the movie is really generic, a bunch of idiots roaming around an abandoned building and getting picked off one by one by some monster. The necessary gratuitous sex scene and gratuitous shower scene consolidated into one sex-in-the-shower scene, which proves that the makers of Creepozoids are thrifty if nothing else.

Now the first weird thing about this movie was that there is some virus floating around that makes infected people not have to eat, and gory stuff happens to them if they do eat. However, there is also a big monster roaming around attacking people which has NOTHING TO DO with the rest of the movie!! I was waiting for them to say something like "when people are infected with the virus for a long time, they turn into insane monsters!", but no, there just happens to be this thing hanging out in the same building as the rest of the characters.

Now let me get to the "climax" of the movie - which takes up the entire last half of the movie!! OK, so the monster kills all but one of the characters, and he decides to try to kill the thing. Now, I looked at the counter on my VCR and said to myself, "hey, there's more than half an hour left in this movie!" There was no mistake in my addition - for half an hour, the guy attacks the monster, the monster throws him into a shelf or something, he gets back up, attacks it, etc. Eventually, he kills the thing... or does he? I think I groaned out loud as some movement is seen in the dead body of the monster. Suddenly, a disturbing baby puppet hops out of the dead body! A few minutes later (did I mention that this movie is a little slow paced?) the baby gets around to ambushing the guy, and he throws the baby away into a shelf, and the baby attacks him again, he throws it away, etc. I guess he kills the baby and the movie ends, but I can't swear to this.

Things got a little hazy after seeing this surreal movie. If you really think you can handle watching what might be the most painful and cliched movie ever made, by all means, watch this movie! It is certainly the epitome of the 80's B-horror flick, at least as far as badness is concerned. If you want to see a good movie DON'T watch this one, for God's sake!!!

Review by slowbrooo@aol.com from the Internet Movie Database.