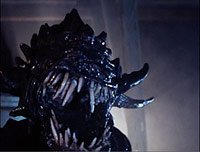 The late, great character actor Charles Napier, a favourite of filmmakers Jonathan Demme and Russ Meyer, here has one of his rare leading roles. He plays Ian McLemore, your standard-issue rule-breaking, maverick police detective. He and his partner Jerry Merris (Ron Glass of 'Barney Miller' fame) pick up the trail of a monster that's crashed to Earth. But this is no actual extraterrestrial; it's a predatory life form that was designed by the government for use as a biological weapon. Various G-men try to stymy McLemores' efforts as he vows to find and destroy the rampaging, slime-spewing creature.

Afforded a relatively bigger budget than was usual for him, veteran B movie director Fred Olen Ray shows us a pretty good time with this one. It's knowingly cheesy stuff; the actors stop short of winking for the camera, but there IS a definite tongue-in-cheek quality to the whole script (written by Ray and T.L. Lankford). Some of the lines ARE pretty dopey. And Ray & company lightly poke fun at the conventions of the genre with their inclusion of various cliches (such as the hard-driving boss (Bo Svenson) who demands results). The body count is modest, but the monster is appropriately gnarly, the pace is good, and the movie generates some genuine chuckles along the way. It also features a unique seduction scene, as McLemore literally charms the pants off of hottie cop Sandbourn (Ann Turkel, "Humanoids from the Deep") by donning a kilt and playing the bagpipes.

As was often Rays' style, he packs the cast with a number of familiar faces, some from B movies of old, like Anthony Eisley ("The Wasp Woman"), Norman Burton ("Bloodsport"), Michael Forest ("Beast from Haunted Cave"), Elisabeth Brooks (the temptress from "The Howling"), James Booth ("Avenging Force"), Fox Harris ("Repo Man"), and Rachel Howard (Chili in "Friday the 13th Part III"). Julie "Catwoman" Newmar plays a psychic lady who has to try to convince authorities that her information has merit. The engaging Napier, all full of swagger, has good chemistry with both the sexy Turkel and the amiable Glass.

"Deep Space" is no great shakes, but then it's not even trying to be. It's merely good, straightforward entertainment that gives fans of the genre a good show for 91 reasonable minutes.