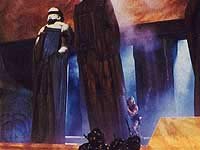 It's a classic confrontation between good and evil, and a struggle to save the Universe from the dark side, when a villain rises up and threatens all who oppose him with slavery or destruction in the 1987 offering `Masters of the Universe,' directed by Gary Goddard. The evil Skeletor (Frank Langella) has captured the good Sorceress of Castle Greyskull (Christina Pickles) and is awaiting the moment when the Moon is at it's zenith, at which time he will be able to absorb all the powers of the cosmos and become Master of the Universe and omnipotent Ruler of their land, Eternia. But everything is not yet right; though he has the Sorceress in his clutches, his formidable opponent and champion of the people, the indomitable He-Man (Dolph Lundgren) is still at large, and Skeletor knows he must bring him to his knees if he is to succeed. Besides which, the `Cosmic Key' that will make it all possible for him is not yet in his possession. So his task is two-fold: He must enslave He-Man and find the Cosmic Key in order to effect his plans. And the secret of the Key lies with the peaceable locksmith and inventor, Gwildor (Billy Barty), a trusting soul, who betrayed by the beautiful Evil-Lyn (Meg Foster) has gone into hiding. Now it's up to He-Man to foil Skeletor and save Eternia and the Universe from his unscrupulous grasp and restore power to the Sorceress and Castle Greyskull.

Though the make-up, costumes and special F/X are a bit cheesy, and overall the acting is bad, Goddard has put together a movie that is fun and exciting, and by lightening up on the menace has made it accessible to the whole family, including the younger set-- and, of course, since it's based on the children's animated TV series, it's just what you would expect, or should I say, hoped for, going in. Goddard moves it all along at a crisp pace, never allowing it to get bogged down unnecessarily, and the ideals and principles to which the story adheres-- loyalty, honesty, trust, love of family-- all make this a worthwhile endeavor and a film to embrace. Call it a poor man's `Star Wars' (from which it draws heavily, with the plethora of laser blasts and the ersatz `storm troopers' of Skeletor's army); the scale, perhaps, is not nearly as grand, but the sense of adventure and the overall feeling of Lucas's monumental film are certainly present.

Hidden behind the bony skull mask, Langella brings Skeletor to life with flair, successfully conveying the evil at the core of his soul. This is a creature cloaked in darkness, ruthless and intimidating, effectively sinister, but less daunting than say, Darth Vader. He's scary, but it's not a character that's going to drive the little ones out of the room shrieking in terror. Langella makes him a fun kind of evil presence, which keeps it upbeat and creates the necessary sense of evil without taking the viewer to the brink of despair or bad dreams. It allows that unsettling feeling within an atmosphere of hope, and the realization that in the end all will be well in Eternia. It's a strong performance by Langella, and without question the best in the movie.

Another good performance is turned in by Meg Foster, as Evil-Lyn, Skeletor's right-hand woman. Like Langella, Foster manages to convey evil without too much menace, and few actors have such absorbing, riveting eyes, which she uses to great effect here. With her flowing cape, meaningful stride and a glance from those mesmerizing eyes, Foster makes Evil-Lyn a force to be reckoned with; she's a formidable opponent for He-Man, and one of the most memorable characters of the film.

As He-Man, Lundgren certainly looks the part, which is no doubt what put him in the role to begin with. But can he act? Let's just say this is a fantasy, and as such, what Lundgren brings to the part is good enough. When he raises his sword and exclaims, `I have the power!' it's a rush; He-Man lives-- embodied by Dolph Lundgren, and for this movie, it works.

Fans of the TV series `Friends' will be interested in seeing the young Courteney Cox (twenty-three when this movie was filmed) here in her motion picture debut. As Julie Winston, a high school girl who unwittingly gets drawn into the fray, she comports herself well enough, though her performance is a far cry from anything that would earn an Oscar nomination. She does make Julie believable, however, which is the important thing. Again, this is a fantasy, and as such it doesn't take a lot to keep you in the story. Suffice to say that Cox has come a long way since making this one.

James Tolkan, on the other hand, does not fare as well as some of the others here. A talented character actor, he nevertheless gives an embarrassingly bad performance as Detective Lubic. A stereotype if ever there was one, Tolkan still can't seem to get a handle on who Lubic is or where he fits in. This is a role just about any actor could've walked through without missing a beat, but Tolkan manages to muck it up so badly he becomes a distraction at times. It may have been a case of trying to make too much out of something that simply wasn't intended to be anything other than what it was; and it's understandable that as an actor Tolkan would want to make the most of what he was given. In this case, however, it was unnecessary, and just didn't work.

The supporting cast includes Jon Cypher (Man-at-Arms), Robert Duncan McNeill (Kevin) and Barry Livingston (Charlie). Enjoyable family fare, `Masters of the Universe' may not be the best movie of all time, but it is what it is and offers a fun and satisfying evening's entertainment. It's the magic of the movies.

Review by jhclues from the Internet Movie Database.

Featurette - Behind The Legend
4:25