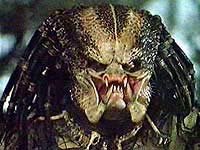 There are several reasons why the predator is just hands down the best movie ever, ranging from the cast, the visualaudio splendor and the overall feel of the film.

Obviously, someone put in some serious time behind the scenes to make this film what it is. The visual effects of all of the human-only fight scenes makes this a worthy action film, and when you couple that with the predator's visual effects, it stands head and shoulders (just the the Predator itself) above all else. The sound on this film is excellent. Dialogue is understandable, gun shots loud, and ooooh the creepy noises the Predator makes.

The cast...what can be said about the cast? Quite possibly the best possible cast ever assembled for any movie.

Arnie played Dutch like a fiddle. All of his one-liners were timed the way only Arnold can time them, and every time I saw him he looked bigger and bigger. The Cool-guy beard, the cigar, the messed up war-paint...it's so perfectly macho that you don't know what to do but stare.

Carl Weathers was perfect as Dillon. You liked him, but only as far as you could throw him. Sure he may have lied about a few things, but I think everyone makes different truths at times. He got his job done at least. In Rocky, he looked like he was in good shape. In Predator, he looked like a mammoth (if only his muscle scenes weren't next to Arnie's...shame shame shame)

Hawkins was good for comic relief, but he also gave you a character that didn't need to be there for the entire film. You liked him, but they made him just nerdy enough that you were okay with him "hangin out" instead of going on with the rest of the group, if you get my meaning.

Elipidio Carillo gave me pleasant dreams when I was younger because of the scenes in this movie...not your typical blonde bombshell, but enough spice to be just nice.

Bill Duke did such a good job as Mac that I do a double take every time I see him in anything else. If I see him in another movie, I expect him to say "Anytime..." or his more hysterical "gonna have me some fun....gonna have me some fun..." Plus you gotta love a guy that can enunciate so well under stress: (SPOILER) When he and Dillon are preparing a flush-and-shoot to get the beast, he says "Out there...past them treeeeeeeeeeeeees" you can totally hear every syllable being drawn out like road map.

Poncho was a good guy to have as a stabilizer. He didn't have the gruff toughness all of the muscle-head actors had, but his quips were timed as well as Arnie's, and he seemed to have some determination. I especially like his quip to Mac about "Think you could have found something bigger?" Another good one: "Strap this on your sore rear-end, Blaine (he actually didn't say "rear-end", just to let you movie review people know I DO actually know the movie)

Gov. Jesse Ventura was something else entirely in this film. I will simply list his awesome characteristics, and that should be enough. His big hat. His M-TV shirt. His BIG gun (methinks he was the first of many action stars to use a helicopter "mini" gun as an assault rifle.) The fat cleft in his chin. The chewing tobacco. Plus, he had the three absolute best lines in any movie ever: Line #3 "Old painless is waitin" (it loses some points since he was saying it to a goofy opossum-porcupine-hedgehog or whatever it was). Line #2 "I ain't got time to bleed" and Line #3 (which I think he should have used as his campaign slogan when running for governor): "You're a bunch of slack-jawed FA_ _OTS...this stuff'll make you a god-damn sexual tyrannosaurus...just like me"

The Predator...well played, despite notable lack of dialogue. No real good on-liners from him, but we'll let it slide. Very sad the Kevin Peter Hall passed away in '91, but his performance as The Predator was perfect. He sort of loped around. He never seemed to be in too big of a hurry. If I was 7'2 with that gear, neither would I.

Even the auxiliary characters were well done. The General seemed just the perfect amount of strung out and nervous. The long-haired South American who jumped into the ill-fated truck (that Arnie lifted in first major battle scene) seemed pretty jovial, which is realistic in rebel camps. I say that as if I have experience in rebel camps...well, I have seen several in Hollywood films, so that makes me expert enough.

Review by Lovelljw from the Internet Movie Database.