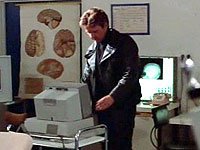 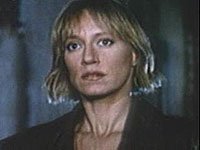 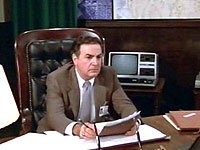 THE RETALIATOR is a fairly middling entry in the field of low-budget TERMINATOR rip-offs which were all the rage back in the late '80s. There's an abundance of action, some of it done well, some of it done not so well, and a plot which also manages to drag in elements of ROBOCOP (the cyborg recovers her memory, which causes her to go berserk), but it's the low budget which ends up flooring this otherwise interesting epic-wannabe. Lots of the film takes place at night, which makes half of the action sequences hard to see and lessens their impact. The daytime scenes look and feel cheap and the film resorts to disorientating flashing lights at the climax in a vain attempt to be frightening.

Location filming was done in Israel, to give the movie an impressive international feel, but even that's not entirely successful (yeah, so it's been filmed in a foreign country - it still ends up looking cheap!). The only people I can think would want to watch this movie are those who are fans of the two leads. Robert Ginty (a dependable B-movie hero since THE EXTERMINATOR) is on hand as a tough mercenary who gets injured a lot and runs around looking hard with a big gun, giving one of his customary stony-faced performances. Sandahl Bergman (CONAN THE BARBARIAN) is the female robot, and scarily looks like James Woods in this movie. Although she's saddled with really cheesy '80s big hair at around halfway through the movie, she still manages to create quite a scary persona by looking very alien-like. Bergman is given a good, tough role and gets to do lots of amusing things like talk to a computer over the telephone!

There are a fair amount of car chases, cool car crashes, and plenty of explosions to keep things moving, along with lots of stunts (my favourite is when Ginty slides down the roof of a building to make his escape). The death scenes are frequent and often filmed so that they are powerful, with maximum impact (my favourite comes when the Retaliator squeals down a phone, bursting a guy's ear drum!), and there's a high body count for action lovers to enjoy. The violence level is high, with loads of shootings and people getting burned to a crisp, but the gore is low and limited to a severed hand and foot and there are no robotic special effects like the box would have you believe.

Instead we must make do with some cheap rip-off robo-cam work which, whilst colourful, is hardly in the same league as the one used in THE TERMINATOR, or even the alien-vision in PREDATOR. Bergman finally gets cut in half by a bulldozer of all things, and the best effect they can muster is to have the old trick of burying her body in the ground with a gruesome body (severed at the waist) above. But the end result is that this has all been done before, on a higher budget, and with the style, suspense, and excitement that this movie lacks, despite the best efforts of a genre cast.