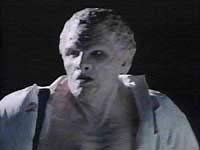 In 1991, three years have passed since a huge spaceship crash landed on Earth, dumping over a thousand humanoid beings into our already rapidly expanding population. These "Newcomers", which is what we have come to know them as, were genetically-engineered for the specific purpose of slave labor. Soon afterwards, they are put into quarantine. The newcomers have almost all the physical features of human beings except for a few. They have no hair on their heads, the males can become pregnant and they have two hearts instead of one. When released, they are then integrated into our society. They are given names of famous places or important historical figures like San(m) Francisco or Ronald Reagan. This integration into our society however, opens the door for a new kind of racism. Racial slurs like "slags" are uttered behind their backs. Perhaps for the first time minorities are going to be looked upon from a different perspective. Human beings begin to fear for their jobs as the newcomers start to take over people's employment opportunities. It isn't long before they are being featured advertisements too. Much as Chinatowns have formed in major cities around the world, the newcomers are given their own "Slag Town". Even as the newcomers start to become a big part of our society, this also opens the door for extraterrestrial crime. This in turn, introduces us to human cop, Detective Matthew Sykes(James Caan). Sykes, who has a slight distrust towards newcomers, becomes even more hateful of them one night after getting into a shoot-out with two newcomers, which leaves his partner dead and him thirsty for revenge. Matthew then sees his chance for revenge the next day, when he is assigned to be partnered up with Detective Sam Francisco(Mandy Patinkin, who is only recognizable by his voice and a few facial features). Francisco has recently been promoted and in turn has set a milestone for newcomers and the history books as becoming the first humanoid detective. Sykes who refuses to introduce Francisco as Francisco, gives him the nickname "George". Sykes is naturally hateful towards Francisco, but as time goes on he soon begins to accept him for who/what he is. As their investigation goes on, it leads them to the center of an extraterrestrial drug ring, headed by a shady newcomer named William Harcourt(Terence Stamp). The drug, known to the newcomers as "Jabluka" but better off known to us as liquid detergent, is a very potent narcotic. As George says "it's more potent than any human drug." He is right about that.

The drug, when taken in large quantities, can trigger a change in the newcomers, a change that is best kept secret. This is why George becomes so eager to see the drug destroyed before its presence is known to the human population.

"Alien Nation" is such a unique piece of science-fiction that had the potential to be something really spectacular. It really bugs me that this movie had the chance to be something so amazing, so new, that it instead became a standard buddy flick with some sci-fi stuff thrown in it. James Caan and Mandy Patinkin make a good team and Terence Stamp is good to as the evil Harcourt.

I believe that even though this movie is basically failed potential, I have gotten the bizarre social message hidden within it. It contains a message about how amazingly fast the newcomers have become a major part of our society. It amazes me that William Harcourt, although he is the bad guy in this movie, he is also extremely well educated. It's pure genius that he is able to use his high social status amongst the humans as a means of becoming a well known drug dealer. Human drug dealers probably would not need to envy or want to kill Harcourt, since they could find equal business opportunities in both their own communities as well as the newcomer community. The story also tells about the competition of aliens over humans. For millions of years, humans have been the dominant species on Earth. Now with the arrival of the newcomers, humans for the first time ever, are facing competition with a species that becomes more and more advanced every day. This explains largely in part as to why we are becoming more afraid of them, for fear of not only our jobs, but our place as the dominant species of our own planet. It won't be long before the newcomers become involved in human politics and then there may soon enough be a humanoid president. With this in mind, it is possible that not far down the road, that the newcomers could enslave us, as they were back on their own planet.

In some ways, the origin of the newcomers and their position in our society, reminds me of the history of African-Americans. Being African-American myself, the story reminds me largely of the civil rights movement of the 1950's and 1960's. African-Americans, as well as any other minority group, have faced about as much discrimination as one could take. The racism that has been associated with the newcomers is almost exactly like what happened when minorities began taking up jobs that whites had been vying for.

Do you see what I mean? "Alien Nation" could have tackled so many social issues dead-on and would be a classic by now. Even with these faults, I enjoyed myself while watching this and I will try not to hold them against the movie.