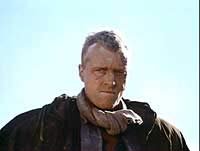 What a brutal little film this is. We enter a desolate wasteland, the scorched remains of what once was the twentieth century, before "the cruel wars that followed", and track a band of "Juggers" - a sports team that roam the wastes, from filthy settlement to filthy settlement, challenging the population to raise a team of juggers and play 'the game!'

I love that the rules of 'jugging' are never explained, we simply observe, and learn. There seems to be few rules - it's a primitive, extremely violent version of American football, except the quarterback is also the running back and the offensive linesmen swing big sticks. The defensive linesman is a big dude swinging what sort of resembles a cat o'nine tails whip made from chains. Basically, the ball is a dog's skull and the object is to ram it onto a stick on the opposing side of the field. As there are no time pieces in this new world order, the game is timed by throwing stones at a metal gong. If the challenger can last 100 stones without the home side dog-skulling them, they win. Got all that? Good. Let's move on.

My favourite scene (although I do like that extreme violence) is when they enter the underground "Red City", and Hauer and Chen pass a man doing chalk art on the filthy pavement. I like how everyone just walks over his artwork, paying it no heed, and I also like that he doesn't object, he just keeps chalking. It's a great example of showing, rather than telling, the audience that in a world where survival is the priority, there is no room for art. No time to stop and admire beauty.

I really dig other parts of this movie, like the fact they make the oldest guy in their troupe lug a wardrobe full of their sht on his back across endless miles of desert. Nice. And the guys in the weird tank that stop them in the middle of the desert and basically take a ransom from them. We're not really told who these weird guys are, or why Rutger and his team bow down to them and fork over their hard earned winnings without a fight, or even a harsh word. Well, one guy spits on the ground in protest. I also like that when a member of their team is crippled with a broken leg, they just leave him there and walk off. Darwin at his most brutal. But this opens the way for Joan Chen to join the team. I also like that it's never explained why she wants to hook up with this band of violent men and trek off into the desert looking for a fight. She just felt like a change, I guess.

I also really like that there's neither a back story nor a bright future anywhere in sight. We know from a single title card at the start that these people don't remember how the world got fcked up, and are so busy simply surviving they're not really thinking about a way to "fix" things. This is simply the world they exist in, and world where the game is everything and the epitome of social standing is to win "100 stones!" This brings me to one of my favourite bits of the movie, so typically Aussie, where Rutger helps the dude (big Australian guy) he's just pummelled to his feet, and the dude remarks, "ShtI forgot you were better than me!" No hard feelings, mate. Love it.

That reminds me of another favourite bit, and indeed one of the best bad guygood guy moments I've ever seen. It's where Rutger is walking off, after the final confrontation, to return to a life of endless jugging across the desert, living from meal to meal and sleep to sleep. The big Australian dude who got pummelled by Rutger asks the villainous ruler of the "Red City" why he's letting Rutger go. The bad guy simply muses that there's nothing more he could do to make Rutger's life any worse than it already is. What I love more is that Rutger knows it, and it doesn't bother him. He's not only resigned himself to this life, he's gonna enjoy it as well, dammit.

Review by tenthousandtattoos from the Internet Movie Database.