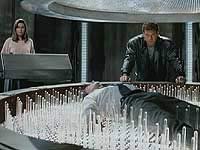 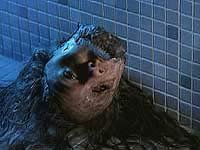 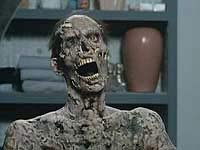 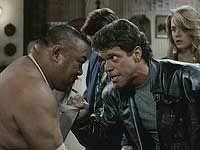 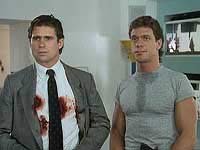 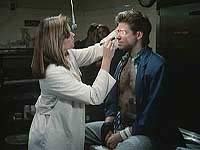 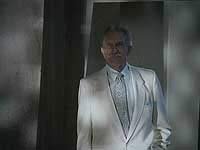 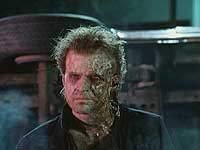 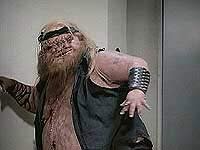 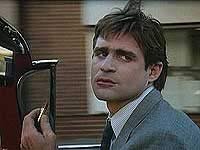 Being dead is one of those physical limitations where it stops individuals right in their tracks. It also becomes frustrating to give explanations to how it can be reversed. This movie isn't the first one to focus on dead characters but it's intriguing to watch it. As stated in my summary, this film plays out like an early version of what R.I.P.D. (2013) could've been - its plot runs parallel to it. And if you account for the other elements such as the deformed dead villains reeking havoc and it's up to two cops to take them down. It's hard not to see the similarities. The sad thing is, this movie could've been just as good as R.I.P.D. (2013) if they had developed the writing more. It was mighty close though because it has an abundance of good points.

Again the story focuses on two smart-aleck cops, Roger (Treat Williams) & Doug (Joe Piscopo) who end up fighting the weird side of crime. The problems are ushered in by thugs that just don't seem to die. Even worse is that every time they come back, they look more grotesque than before. Here, Treat Williams and Joe Piscopo demonstrate comical chemistry and how to have fun with such a ridiculous concept. Although Piscopo essentially is the definition of the 1980s with his sense of style and the way he spouts out cheesy comments, he's still a strong highlight. Meanwhile, Treat Williams plays opposite of that; cool, calm and collected. That is until later on in the film where he goes rather bonkers, which is also comical. The background to their characters' history isn't gone into with depth but it's a change to see two wisecracking cops getting along even with their odd differences from the beginning. Instead of going the usual route of having them bash heads before they come to a resolution.

To most, the rest of the cast isn't much worth to remember but there are some attractive and recognizable faces. Actresses Lindsay Frost and Clare Kirkconnell play cute women, both of which demonstrate decent acting. Then there's a brief scene with Robert Picardo being the Lieutenant of the Police (with a mustache). The veteran actors that older viewers should recognize are Keye Luke as a Chinese restaurant owner, Darren McGavin as a head doctor and the famous late Vincent Price who plays an important plot point in the movie. All of which these actors have scenes that are enjoyable to watch. Surprisingly, all these scenes were constructed by first time writer Terry Black, who didn't do too badly of a job. Though there are some parts though that don't work.

Unfortunately, even though Black's scripts for the main characters were comical, the logic behind various pieces to the film's structure are left unexplained. For example, how is that once someone dies, they were able to figure out they had 12 hours to live after reanimation? Also, some other characters' backgrounds after they were reanimated seemed longer than 12 hours. If so, how is it that they lived longer? Speaking of which, there was a subplot involving the possibility of extending the reanimation process, but is quickly shot down. Strangely enough, a character ends up extending his reanimation time and it's never explained how it would help resolve the main characters' problem. Which leads to the scripts final issue - neglect for its characters.

I've never seen a script so wonderfully build up its main characters' personalities through the first two thirds of its running time and then completely neglect them by the final third. By neglect, I mean total disregard to giving a sense of resolution to the issues at hand or what has already happened. That's not to say the ending isn't comical, action packed or even ends on a good note. It just seems to forget what the whole purpose of the story was and therefore finish without a complete sense of closure. Then again, maybe it wasn't intended on having one but it felt like there could've been. The only other complaint viewers may have is with Ernest Troost's style of film music. I say this for two reasons. The first is that, it does appropriately represent the scenes that are portrayed on screen, but they sound like that of William Loose's music from Night of the Living Dead (1968). It sounds old with a tad of 80s synth but not a lot.

The second reason why viewers may be disappointed with Troost's music is if you watch the trailer to this movie. The music there sounds way more fun, memorable and somewhat more appropriate to the tone of the film. I only wished he used that theme. However, there are a couple more good things that haven't been mentioned yet. The film is directed by Mark Goldblatt, also known for directing his forgotten only other film a year later, The Punisher (1989). Although his skill is more in editing, the direction is competently done. The other component that is done with expertise is by make-up effects designercreator Steve Johnson's work. The gore and practical effects that are mixed in with these premature R.I.P.D. (2013) "deado" creatures looks fantastic. The look of them are not something you see everyday. In total, its still filled with cheese and plot holes but its mighty tasty.

Its weak points are in its writing and music, but they aren't strong enough to overpower the whole film. Thankfully, this buddy cop horror movie has enough charm, gore and unique practical effects to be a delight anyway.