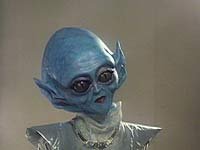 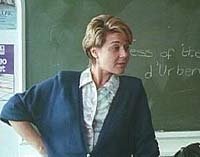 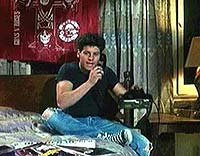 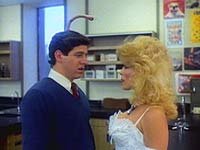 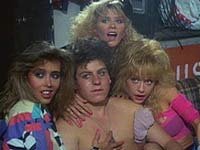 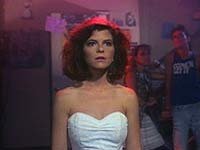 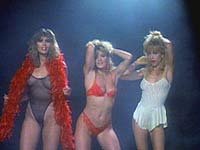 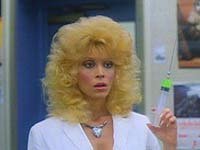 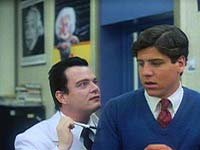 Alien" is an enjoyably goofy production from Full Moon, a pleasingly sleazy schlock comedy with lively performances and an overall harmless appeal to it. It may be silly, but the truth is it's just about impossible to resist.

A number of familiar faces fill out major and supporting parts, so B movie lovers will be happy to see them all here. Billy Jayne, whom you may have seen in "Bloody Birthday", "Cujo", "Just One of the Guys", and 'Parker Lewis Can't Lose', stars as Wesley, a straight arrow, wimpy college student who agrees to help out with a scientific project for extra credit in his biology class. Trouble is, his new teacher, Ms. Xenobia (veteran TV bimbo Judy Landers) isn't playing it totally straight with him, and the "vitamin" that she tests on him transforms him into an irresistible stud, complete with a chittering worm that pops out of his head.

Very amiable from beginning to end, . Alien" may not have its viewers necessarily laughing out loud but it may have them smiling, at the least. It's got amusing makeup effects by Greg Cannom and his team and a non-stop, upbeat pop & rock soundtrack. It's also quite sexy, and voyeurs will love the generous servings of breast shots that director Dave DeCoteau provides. In addition to the perky Ms. Landers, the lovely ladies of the movie include Olivia Barash ("Repo Man"), Ginger Lynn, Linnea Quigley, and Laura Albert as the rocker chicks, Michelle Bauer and Karen Russell as co-eds, and Elizabeth Kaitan as a waitress. The solid schlock movie supporting cast features such people as Stuart Fratkin ("Teen Wolf Too") as the obligatory obnoxious best friend, Raymond O'Connor ("Halloween 4: The Return of Michael Myers") as Xenobias' nerdy associate, Arlene Golonka ("The In-Laws") as Wesley's mom, Jaynes' real-life brother Bobby ("Tremors") as his sibling, and Edy Williams ("Chained Heat") as a gym teacher. Troy Donahue gets prominent billing, but actually isn't in the movie for very long.

If you're looking for some dumb trashy fun, . Alien" is recommended. Hell, one can't knock any lowbrow comedy that actually works a message about self-esteem into its mix. It's fairly fast paced stuff with a reasonably short running time and enough gags to make it palatable.