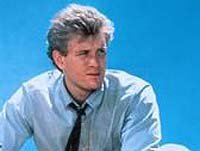 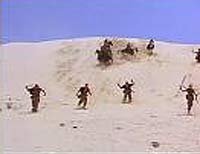 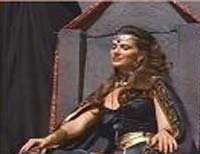 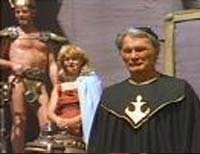 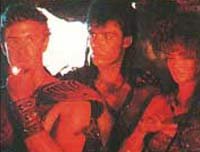 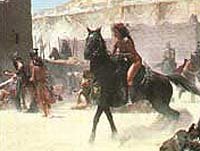 The only thing in Gor that showed any signs of energy and effort was the music score, even if the placement didn't always come off right that at least had some vigour and soul. And there is the odd moment that offers some very mild cheesy fun.

Other than that Gor, for personal tastes and many others, was extremely weak. It is very cheap-looking, the photography for the cheapest-looking fantasy TV show is better-looking than the slapdash photography for Gor, the sets are drab, the effects look half-finished and the costumes is reminiscent of plastic and left-over fabric. The dialogue is incredibly inane, it offers some mild campy amusement to begin with but gets really tiresome after a while, and so unnatural its flow that it's like hearing some really bad dubbing. Gor's story lacks any kind of wonder, excitement, fun or suspense(sense also applies here). Instead it has many daft and irrelevant scenes, is so episodic in structure that it becomes painfully predictable and while it was never easy fully understanding what was happening the final third really took the biscuit, being deadly dull and incoherent. The ending is rather abrupt as well and the fight scenes are hilariously bad, primary school playground fighting is better choreographed and more realistic-looking.

The characters are too cardboard and act far too obtusely to allow us to properly connect with them or be interested in them. The film shows a completely inept character at work in Fritz Kiersch and the acting from the two leads is atrocious, Rebecca Ferratti's sexiness is not enough to make up for very expressionless acting and Urbano Barberini is even worse, his cornball line delivery gets annoying fast and he spends the entire duration acting like a buffoon. Gor also has two talented actors on board, unfortunately their talents are very poorly utilised. Oliver Reed is underused and while he always excelled in villain roles this saw Reed going through the motions. Jack Palance is even more wronged, like Reed it was playing villains where he particularly excelled as an actor but that doesn't translate here, his appearance is pretty pointless actually(screen time and purpose of character) and he spent his whole screen time confused and pained.

Overall, extremely weak aside from the music with two talented actors embarrassingly wasted in roles that would have suited them to the ground if treated right.

Review by TheLittleSongbird from the Internet Movie Database.