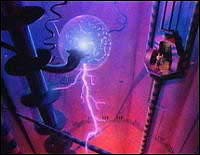 "Killer Klowns from Outer Space" is one of the few 80s horror comedies that actually seems to have gotten better with age. When I first saw it on late-night cable about ten years ago, I thought it was a fun little throwaway movie, but having recently seen it again on DVD, I was surprised to find that it was better than I had remembered.

Before the Wayans brothers ran the genre into the ground with their ham-fisted (and increasingly boneheaded) "Scary Movie" franchise, horror comedies were usually odd little, low-budget movies that often didn't do well, either because audiences didn't know what to make of them or the producers didn't know how to handle the material. The best horror comedies are those that work on both levels. They're funny, but they also maintain a sense of unease. In this respect, movies like "Attack of the Killer Tomatoes," "Young Frankenstein," and even the "Scary Movies" aren't true horror comedies because the rampaging tomatoes, Peter Boyle's monster, and the Wayans' pot-smoking slasher are objects of derision, not fear. Those movies were broad slapstick comedies, the point of which was not to create a sense of menace, but to say "look how ridiculous this is."

"Killer Klowns" is one of those rare horror comedies that actually gets it right. Unlike other films, in which the jokes are often at the expense of the horror elements, the creepiness is never short-changed for the sake of a cheap laugh, though there are plenty of those. One of my favorite scenes occurs when the evil clown-things arrive at a closed amusement park and are confronted by a security guard. The guard-'a deadpan Broderick Crawford type-'takes one look at the cream pies they're holding, and says sternly, "What're you gonna do with those pies, boys?" Yep, it's a shameless setup, and you can see the payoff coming a mile away, but it's still laugh-out-loud funny.

One of the reasons the movie works is that director Stephen Chiodo has shot it like a straightforward horror film, in which the monsters just happen to be extraterrestrial clowns. The actors are on the same page. In a film like this, it would be easy for the actors to over-arch into high camp or self-parody, but the acting is convincing and surprisingly restrained, especially the two leads, Grant Cramer and John Allen Nelson, both of whom play it completely straight in that 1960s, Steve McQueen sort of way. The only actor who does any scenery-chewing at all is the great John Vernon as a snarky, bombastic cop who is convinced the entire town has gone mad, and who has some of the movie's best lines. (On the phone with an alarmed citizen: "They took your wife away in a balloon! You don't need the police, you need a psychiatrist!") Other reviewers have compared the movie to 'The Blob," which it does resemble in some respects. The movie takes place in a small town with a small police department (only a couple of cops on duty), and the events all unfold over the course of a single evening, which lends an almost real-time immediacy to the action.

I've read that the movie was made on a modest budget, but the production value is high, the clowns are creepy and funny, and the monster effects are quite good. This is a great, fun little movie, that delivers more sheer entertainment value than a lot of the bigger, slicker movies that have been produced in the last couple of decades. If you're ever bored of an evening but don't feel like going out, you could do far worse than to put a bag of Jolly Time in the microwave and spend a guiltless hour-and-a-half chuckling at the sinister intergalactic buffoonery of Chiodo's "Killer Klowns." It's killer. Really.

Just remember: "In space, no one can eat ice cream!".

Review by Katterfelto from the Internet Movie Database.