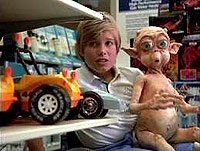 "Mac and Me" was one of the more infamous box office duds of its time. While this would dissuade normal folks from watching it, bad movie buffs like me naturally gravitate to it because it is such a legendary flop. The biggest reason it failed--the public quickly saw it for what it really was--a blatant rip-off of "E.T.". And, this time even MORE corporate references are thrown in the viewer's face...with McDonald's and Coke references galore!! Instead of Reese's Pieces, they feed this god-awful corporate shill Skittles! And, to revive Mac's family who are on the edge of death, they feed them Coke!!!

The film begins with an incredibly ugly family of aliens mysteriously getting sucked into a US space probe. They are then deposited on Earth and their baby, Mac, is lost and must find its way home. In the process it meets a nice disabled kid and makes his life complete. But, when it's no longer safe, he and Elliot, I mean Eric, go on a cross- country race to find his parents and get him home--and evade capture. And to do this, they dress him up in a Halloween-type costume! Need I continue?!

So is the film any good? Well, if "ET" had never been made, sure it would have been reasonably entertaining to very young kids who didn't notice that the film was a giant commercial and who wouldn't notice the bad dialog and abounding clichés. But "ET" HAD BEEN ALREADY MADE several years earlier...so the film has zip when it comes to originality. You wonder how the folks associated with the film felt--they must have been really embarrassed at how blatant this was. And, at just about every turn it seems to do it worse than "ET"...and often MUCH worse. It's a vacuous, soul-sucking corporate mess of a film in so many ways.

When I saw this film tonight, it was decades after its original release and I was startled how ugly and expressionless Mac was. However, I had to remind myself that ET also looks pretty crappy when you see him today because we are used to much better special effects in 2015--though Mac is definitely crappier. The worst is when the dead, expressionless doll is riding on Eric's lap during the big chase! As for the outer space scene, however, I watched it on a very big screen TV and I was surprised because it looked so nice. This space scene along with actually hiring a disabled kid to play a disabled kid are about the only things that impressed me about the film. Otherwise, a pointless rip-off from start to finish---and not even bad enough to make bad movie buffs laugh. But enough overt corporate references to make this a GREAT film to use as a drinking game--taking a shot every time you saw these blatant ads! Believe me, you would get stinking drunk if you tried this!!

By the way, the kid calls the hideous little alien 'Mac'--an acronym for Mysterious Alien Creature. In no way was this meant to be like 'ET' for the Extra-Terrestrial....yeah, right! Also, perhaps it's just me, but this might just be the most whitebread, corporate and uncool film ever made--especially during the god-awful McDonald's dance scene.