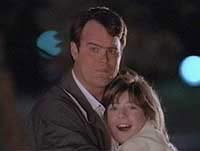 Apparently the early drafts for this story were supposed to be based around...child abuse? Clearly a serious matter. Yet, apparently, the bigwigs at Paramount thought the idea might work better as...a comedy?? Anyway long story short the idea never came to fruition until many years later with a fresh rewrite and director. Somehow after all that we got this wacky sci-fi comedy which has to be based on those old 50's sci-fi B-movies surely...?

Its the basic old fashioned science fiction spiel. The somewhat eccentric scientist Steven Mills (Dan Aykroyd) accidentally sends a radio signal beyond our galaxy, into the next, which strikes an alien planet causing disruption to their gravity (we don't see any of this naturally). So these aliens send one of their own to Earth in order to find out who did it, how, and why. The spaceship lands on the beach in plain view of an urban area but no one sees or hears a thing. Did I forget to mention that this alien (called Celeste) is Kim Basinger? Well there you go, and naturally Mills falls in love with her.

Yes its the old notion of an alien race coming to Earth and just happen to end up looking like a stunning blonde Earth woman. At first I thought the human appearance was a cover for their true alien features, but no! Apparently all the women on this far off alien world look like supermodels, because of course they do. Oh and just to make matters even cornier, these super hot sex bombs don't know what kissing is and gave up sexual intercourse many many decades ago (because they found it pointless and icky...don't question it) and have forgotten what its like. So it looks like Steve is in for a treat right here folks!

The odd thing is, apparently the males of this alien world are all white middle-aged men in what looks like nuns attire? So are all the males like this or are the ones we see the elders? I only ask because we are told that all the women look like sex bombs, so...Also the fact that these aliens from a galaxy far far away look identical to humans and...ah who cares.

So these aliens are basically identical to humans in the looks department, but they have superpowers it would seem. Again the rules to this movies universe are somewhat all over the place but from what I can tell these aliens can do pretty much anything. They have super strength. They can resist extremely high temperatures. They can make objects fly and hover. They can make solid objects pass through other solid objects. Oh and they drink, or live off, battery fluid. So what the hell are these things?? What kind of organic creature would live off battery fluid??

Then there's the little snake-like alien with a single eyeball that lives in Celeste's special handbag. What is that supposed to be?? Another alien lifeform? Something the humanoid aliens created? What??!! It also has tonnes of magical superpowers. This snake is also able to project large holograms of information for Celeste at any given moment. Not sure if only the aliens could see these though, I'm guessing so cos the humans never react to them.

Now I'm a big big fan of Dan Aykroyd, I think he's a comic genius and has been involved with multiple classics both large and small. But alas here he falters. I can see exactly what he's trying to do throughout this movie, but he fails. His genuine wacky charms, fat physical comedy, facial expressions, and endearing technical jargon which he often delivers at breakneck speed, are all present here, but it just feels lacking. He's clearly trying to capture that Ray Stantz magic for this story but it falls flat amongst the cheap effects, bad sets, and weak costars.

This movie came along one year before Tim Burton's Batman so Kim Basinger was still technically small fry. She was mainly known for her steamy antics with Mickey Rourke in '9½ Weeks' so this goofball family comedy seemed like an odd choice. Who else would you cast as a super sexy blonde bombshell at this point? So Basinger naturally fits the part of the sexy alien, but anything else? Not really no. I have always thought Basinger was all looks and not much else (even in Batman 89) and this doesn't sway me. She really cannot act at all. She has no comic timing, looks uncomfortable in many scenes, and isn't funny. Unsurprisingly the only scene where she does come to life is where she has to strip for Aykroyd's character. It's plainly obvious they stuck that sequence in because that's all she could do and what she was known for.

As for the rest. Well there's classic actor Joseph Maher. A young and thinish looking Jon Lovitz. The voice of Harry Shearer as Carl Sagan. And the very young trio of Alyson Hannigan, a seriously young Seth Green, and a blink and you'll miss it cameo from a teen Juliette Lewis.

So in the end Steve manages to send another radio signal to Celeste's planet and stop the gravity issue from destroying it. Hurrah! But wait! The snake thing in Celeste's handbag has orders to wipe out the planet because they thought the humans did it on purpose. Funny how they don't try and communicate with any high ranking humans to talk about this, considering they're intelligent beings and all. Nope they just decide to blow up the Earth. Luckily this plot is foiled and the middle-aged male aliens decide not to blow up the Earth after Celeste shows them how great it is (and the sex and sneezing, yes sneezing).

Instead they allow the pervy character played by Lovitz (who basically plays the same character he's ALWAYS played) to go back to their alien homeworld so he can teach them all about humans, Earth, and how they have sex...lots of sex. You know cos all the women look like supermodels...remember that? Yep hilarious.

So in the end I really can't recommend this. I hadn't seen this since I was a mere sprog and couldn't remember a thing. Clearly I had high hopes for this being a wacky sci-fi starring Dan Aykroyd but alas no. The whole thing looks cheap as chips. The sets are poor and the effects are terrible with hideous bluescreen. The acting is dire as is the humour and bottom line the story is just utter nonsense. Yes its a nutty comedy but you gotta have SOME ground rules.

Review by phubbs from the Internet Movie Database.