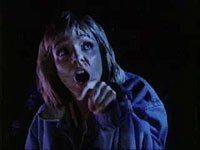 Before this film, the two films featuring killer cockroaches that comes to mind are Creepshow and Damnation Alley. This one, however, is the first full length feature about the little buggers, I think, Creepshow they comprised one segment and were only in a very small portion of Damnation. If there are any others, I have yet to see them, but who knows, there may be others earlier. I know of killer spiders, killer worms and killer bees so if this is the first full length film about roaches then it is kind of surprising as they are nasty and icky little and sometimes big things and in the case of this film really big things!

So, the story has an island that seems to have a pest problem. No big deal, as the sheriff of the town greets his former flame as she arrives to visit her dad the mayor. I do not know how long she was away, I thought they said forty, but figured that must be a mistake as the sheriff and daughter looked too young so maybe four, but then there is dialog later that suggests it was closer to forty. Maybe fourteen? Anyways the daughter takes a walk and she comes across a dog then proceeds further, dog gets killed and when she returns its bones are stripped! We have killer roaches and later super large killer queen roaches! A researcher who is like the supreme queen of cool comes into town and she is the one who has made this monstrosities!

The film has its moments and some really good gore effects, but at the same time it is so slow to start and there really are not all that many victims considering a whole town is overrun. The geneticist is beyond over the top as she literally is so proud of these things. Originally she wanted to create roaches that eat other roaches then just kind of die out, but instead she created a super breed of roach that adapts quickly and is good at surviving. Kind of like making a softer marshmallow, sure you can do it, but why? It also does not figure to be all that hard to make either.

So we get roaches on the attack, but they do not do the best job of really conveying a lot of roaches with the exception of the mayor's house and the sheriff's. Most of the time you just see a few crawling here and there. The cast is pretty good and the pest control guy is rather good too. Just a bit of stretches when it comes to the roaches and too many things happening off camera as they mention people disappearing, but did not show us their deaths. They were too busy showing us the tension between the sheriff's former lover and his current I guess.