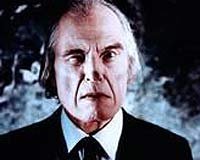 "Phantasm II" literally begins where the original Phantasm ended. Mike (A. Michael Baldwin in the beginning) narrowly escapes capture by The Tall Man (Angus Scrimm) and his army of zombified dwarfs thanks to the efforts of his friend Reggie (Reggie Bannister). After a narrow escape, Mike is placed in a psychiatric hospital and a young girl named Liz (Paula Irvine) does a voice-over stating she is involved with The Tall Man as well. Eight years later, Mike (now portrayed by James LeGros) is let out and he and Reggie go on a hunt in search of The Tall Man, following his trail of victimized towns that have been wiped out and turned into his followers while in search of Liz additionally, who is telepathically connected to Mike through their association with The Tall Man and become romantically involved. Together Mike, Reggie, and Liz fight together in effort to put an end to The Tall Man's mysterious evil once and for all.

The "Phantasm" movies arn't exactly very well known known which is too bad because they are great films. The second installment of the series can easily be considered it's highest point. The first film was a great movie and a definite classic but this one just kind of expands on everything. "Phantasm II" has a completely different mood from the atmospheric original; this one is more of an actionadventure film in a fantasyhorror setting. This is not a bad thing really since those looking for a thrill have come to the right place and for horror fans, the film is still pretty creepy. Thanks to a much bigger budget than the first, there are loads of great special effects in this film, which is essential for a film with as many fantasy elements as this. I'm amazed the original got as far as it did with such a small budget, especially since that one was more focused on fantasy elements. The famous silver spheres of which the series is famous for make a return in this film, only this time there are a bunch of them plus a large gold sphere in this one as opposed to the single sphere in the original. Charicter's in this film are great as they are very likable and and they actor's who play them are great; James LeGros does a great portrayal of Mike despite the fact that he isn't Michael Baldwin, Reggie Bannister is bad-ass as usual, Paula Irvine is terrific as Liz (it's a shame she stopped acting), Samantha Phillips is good as mysterious hitch-hiker Alchemy, and Angus Scrimm of course gives another great performance as The Tall Man.

There isn't really much about this film to complain about. I liked it a lot more than I should have but still. It has an interesting plot, great characters, a mysterious villain, a bald guy with a quad-barrel shotgun who used to sell ice cream, and flying spheres that drill people's brains out :) It's definitely not a film everyone will like but it's definitely one to check out. I loved it and many other reviewers did too. Those concerned about content the film had a bit of blood but isn't terribly gory; most of the violence more or less comes from the spheres who only kill two people. There is also a brief sex scene with a little nudity but other than swearing thats about it. The film is written and directed by Don Coscarelli, who wrote and directed the other three films in the series (and an upcoming fifth and final one) as well as classics like "The Beastmaster" and "Bubba Ho-Tep".

PROS: Solid acting, likable and interesting character's, attractive women (Paula Irvine and Samantha Phillips), a revamped version of the already awesome Phantasm theme (one of the best tunes ever; ranks with Terminator and Halloween), great FX and special effects, a few good quotes, great action, and the plot is pretty good as well.

CONS: As of June 7, 2007 there are no plans to release this on DVD (which is flat out pathetic), kind of confusing at times, and as the 5.8 rating suggests it's not a film for everyone. There really isn't much that is bad to say about this in the end.

OVERALL: "Phantasm II" is not only a worthy sequel to a classic original but ranks with films like "Terminator 2" and "Aliens" as a rare sequel that manages to be just as good as the original. It is also very different in style and the film's score is awesome. Should you have interest in seeing this, be sure to see the original "Phantasm" first since this one begins right as that one ends. I highly recommend this one, I love this series and this film is incredible. It's highly recommended as at least a rent to watch if you have nothing better to do, are in the mood for a movie, or whatever. "Phantasm II" is a thrilling actionhorror flick and I recommend the whole franchise as well. Only if you really liked the character of Liz like I did the way Coscarelli treats her in the beginning of the next installment will be a huge disappointment.

Review by ZeldaFan2929 from the Internet Movie Database.