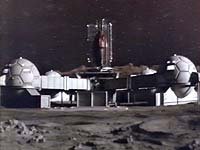 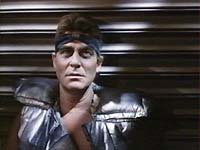 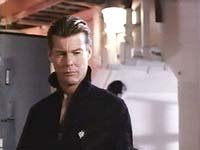 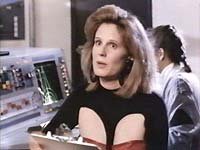 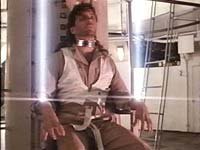 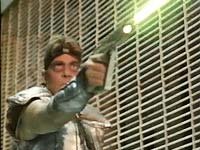 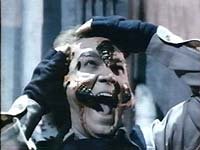 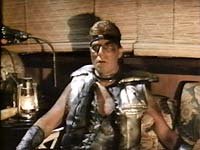 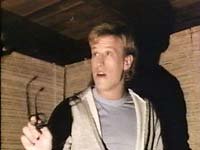 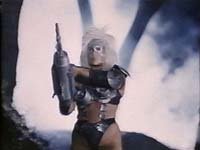 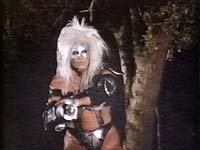 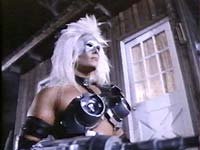 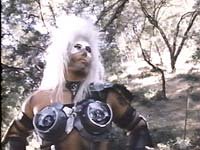 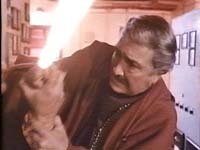 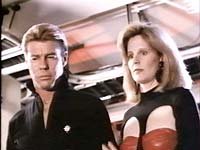 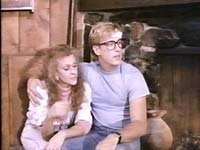 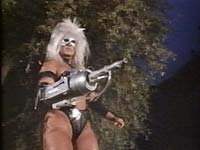 Intergalactic criminal Kol (Ross Hagen) has been sentenced to death and awaits execution on a spaceship designed for just such a purpose. But tonight there's going to be a jailbreak, and Kol flees on a conveniently-placed escape pod and flies towards Earth (which apparently is nearby). There he confronts a group of "teenagers" (who look thirty) and a game warden (John Phillip Law), who help protect him from his worst nightmare... the bounty hunter and executioner android (or more properly "gynoid") the Alienator.

From the cover of the box, I was confident this was going to be an awful movie. But, as awful as it turned out to be, it was a ton of fun as well (probably at least partially because I was watching it with someone who happens to be intensely awesome). The director (Fred Olen Ray), who has specialized in making over one hundred low-grade films (most notably "Hollywood Chainsaw Hookers"), does what he does best and throws together a plot that only half makes sense and gives us rudimentary special effects. Bonus: P.J. Soles appears (as "Tara"), obviously at a low point in her career.

Sure, there's plot holes. Why are there hillbilly rednecks in California (allegedly Los Angeles County if I understood the warden correctly). What's up with the space woman's tacky blouse? Why is there a subplot about the ship captain forcefully trying to win her heart when this story goes nowhere? What the heck is "Quadrant 5"? How does chicken wire create an electromagnetic field that will short-circuit an android, yet land mines do virtually nothing? Why does Kol look like a drunk, Native American football player with emphysema? And the Lund guy (Robert Clarke)... does his character even have a point? Does the game he plays with the captain have a point? Does this movie have a point? But the biggest mystery is the android (or gynoid) the Alienator, played by Teagan Clive. What is an "alienator"? Why does it look like Daryl Hannah from "Blade Runner", only much larger? Because, see, if something is a cyborg, it's part human. But if it's an android, it's all machine. This was an android, so there was no reason to make it look human. It could have looked like anything. Yet, the person who designed her made her the size of a linebacker, with David Bowie's hair and a leotard that shows me just a little too much. If you're going to make a female android, wouldn't the purpose be to have her be seductive and lure enemies in? Mission not accomplished. They say beauty comes in all shapes and sizes, but I think I found a huge exception.

If "Mystery Science Theater 3000" were still around today, this film would be on a very short list of movies that need to get harangued.

Beyond the butt-nasty Alienator (sorry, Teagan, female weight lifters are gross) the film is alright. Maybe there's not much of a story and maybe the characters aren't really very interesting. And maybe the scene with the deer is incredibly adorable for no particular reason -- what use does a killer robot have with a deer? But overall, I actually liked the movie. I won't be pimping it out to my friends or running out to my local video store to pick up the latest DVD copy (which I'm sure is just packed with amazing special features -- not). But I consider seeing this movie time well spent and look forward to similar adventures in the future.

Review by gavin6942 from the Internet Movie Database.