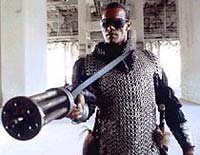 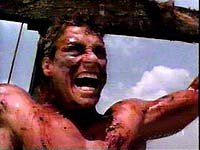 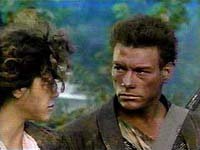 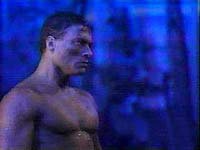 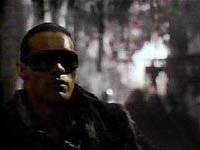 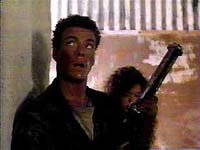 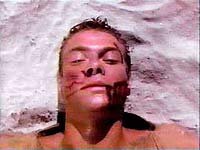 Gibson Rickenbacker(Jean-Claude Van Damme) is a loner of a man whose life has been destroyed in the post-apocalyptic 21st Century America. Then two things happen. First he has an interaction with a robotic woman who seems to have a cure for some kind of plague disease that has wiped out most of humanity. Then he meets up with a street dweller woman who decides to aid him in his quest against a group of cannibalistic troublemakers who have taken the robot woman away.

To start things off, a lot of the characters in this film seem to be named after guitars. Gibson Rickenbacker wanders around a wasteland of ugliness for a good portion of the film talking to ugly people about ugly things in an ugly way. The cinematography is... terrible. Everyone in the film looks sinfully grotesque, and that includes Van Damme, who I consider one of the most handsome action heroes of the early 90s. His character is awash with disgusting looking scars and he would probably look like a burn victim if the scars didn't look so fake. His face is coated with dust and dirt from start to finish, except in flashbacks where he looks like a stereotypical romantic hero on the cover of a romance novel.

The whole film is full of recycled and unfinished landscapes from unfinished films and it's pretty obvious that the set-designer was pretty halfhearted in his attempt to put together a post-apocalyptic wasteland. The people who shot this film obviously did not have any idea how to shoot a film. The whole film looks like a bad home movie. The characters aren't framed well at all and you don't really ever get a good look at any of the characters at any time. The fight scenes are so badly edited that it becomes frustrating to watch. There's some especially bad jump cuts near the end of the film that really will grate on the nerves of anyone. All of the characters, at one point or another, end up shrieking in the face of the audience REALLY LOUD.

It is also one of the most annoying films I've ever sat through, let alone listened to. There's a sequence where Van Damme is crucified for no particular reason, as well as a lot of other real disgusting acts of violence that come across as out of place for some reason and I'm left wondering, who was entertained by this? There's no cool moments of triumph, no good fight scenes or gore, no slick one-liners, no interesting villains, no interesting heroes, and no cool science fiction touches. It's ironic that the film's title is Cyborg, because the film doesn't exactly feature much in the way of electronic machinery. Essentially, this is basically a film in the style of Conan the Barbarian, only with some guns and a briefly appearing robot. Those are pretty much the only two things that make it in any way related to the science fiction genre. All of the dialogue in the film is pure exposition, and it's all pointless in every way. There is exactly zero chemistry between Van Damme and the opposite female lead, and their scenes together are often frightening and embarrassing.

For a late-80s action film, you'd think it would be really tough to be lacking in entertainment value, in every possible way. Enter Cyborg, which is by far one of the least entertaining films I've ever watched. Please keep in mind that I love the films of Jean-Claude Van Damme and I actually really have liked a lot of his direct-to-video work. This is definitely the worst film in his filmography.

Please do not watch this film.I urge you not to waste your time with this. I can pretty much completely guarantee you that you will not like this film. The film is 86 minutes long, but it is so horrible and utterly unwatchable at times that I can promise that it will feel at least an hour longer. By the time Van Damme leaves the village at the start of the film, before there are any fight scenes that last longer than thirty seconds, there is only an hour left of the film. It is the longest hour I have ever experienced with any film. It is so long that I struggled really hard to not fast-forward. This is one of the worst films I have ever seen.

Review by tonymurphylee from the Internet Movie Database.