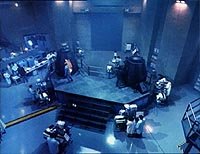 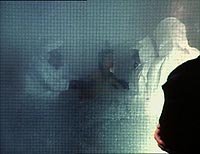 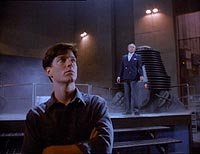 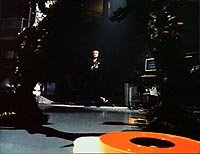 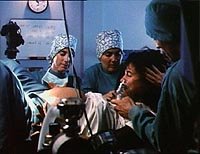 David Cronenberg's "The Fly" was an incredible re-imagination of the old Vincent Price-starring B-horror flick of the 50's. Utilizing deep exploration of character and wonderful, provocative uses of "body horror", Cronenberg's film still holds up as not only one of the finest examples of a remake-done-right, but also arguably one of the best horror films to ever grace the screen.

It was only a matter of time before studios demanded a sequel to the surprisingly touching hit. And that sequel was released in 1989- "The Fly II", from director Chris Walas, a special effects wizard who had worked on the previous film.

And while I would be lying if I said this haphazard sequel was a total loss, I have to be honest in admitting it's a bizarre, mish-mash effort that never begins to reach the perfection of the original. Eschewing Cronenberg's provocative storytelling and metaphorical imagery, this sequel instead focuses on zany, schlock-y gore effects, in a clear attempt to cash in on gore-hounds who were eating up the slasher-films of the era.

We follow Martin (Eric Stoltz), son of Seth Brundle from the original film. Suffering a unique genetic structure thanks to his father's modified DNA, Martin ages quicker than usual, has an increased mental development and also has the potential to turn into a vicious fly- human hybrid in the future. Being taken care of by the cruel Bartok industry (lead by Lee Richardson in an adequately villainous role), Martin attempts to solve the mystery of what is happening to him, while also seeking to take down Bartok with the help of love interest Beth. (Daphne Zuniga of "Spaceballs" fame.)

The performances, while decent, are of little note thanks to an iffy script. While inherently likable, Stoltz and Zuniga just aren't fleshed out enough beyond archetypal "good guy with a problem" and "love interest" characterizations. Richardson is fairly menacing as our villain, however, and a surprise guest-role from John Getz (reprising his role from the first film) is a joy to watch, giving the film its only real connection to the original and sense of urgency.

The script (co-written by future cinematic mastermind Frank Darabont) is the biggest issue here. It's very wonky, and for every step it takes forward, it takes another step back. There are a lot of great ideas and wonderful moments here. An early sub-plot involving Martin's connection with a canine test subject is heartbreaking, in particular. And the film does have a good narrative flow. But many scenes feel contrived and meandering, and things just don't work within the context of the story or series. I wouldn't be surprised if the elements that work came from a Darabont draft of the script, because you can feel his influence at times. But not in a way that works as well as his other films generally do.

Walas's direction is concise, sometimes stylish, and fundamentally solid, though I cannot help but feel he doesn't quite have a grasp of the material or what made the original film work. He relishes in showing us the ooey-gooey details of Martin's transformation, and the plethora of gore effects, but feels almost too restrained and nonchalant about character development and plotting. You can tell Walas wants to deliver buckets of slime and blood, and that's where he excels with the film. It's just a shame that the plot and characters suffer for it.

However, I will concede that the plethora of transformation and creature effects are quite innovative, and I do find myself bordering on recommending the film. Specifically for gore-hounds or people who are interested in prostheticsanimatronics. Because these effects are well worth seeing to those who can stomach them. The "creature" (I'm not spoiling anything, as the film is clearly leading up to a big creature reveal) is well-implemented and realized. (Save for some goofy eyeballs that don't look quite as real as the rest of the body.) Transformation effects are somewhat unsettling and eerie. And the kill-sequences are brutal and hard-hitting. I'd even go so far as to say this film might have the single best "melting man" scene I've ever seen put to film, courtesy the fly's acidic "vomit" and an unfortunate henchman being in the wrong place at the wrong time.

I'm somewhat torn in regards to what to rate this film. The writing is messy and characters are never fully developed, so in that regard, it never begins to even touch the quality of the first film. But fun, innovative effects and likable enough leads do salvage the material in a way that makes the film watchable at very least. It's not necessarily a good watch. But it's an interesting watch.

I'm giving "The Fly II" a slightly under-average 4 out of 10. Not the classic that Cronenberg's film was, but worth checking out once or twice for fans, or for those interested in seeing the zany effects.

Review by MaximumMadness from the Internet Movie Database.