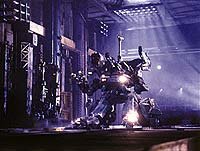 SPOILER!! Saw this on Sci-Fi Channel as Gunhed. And, even though it is Japanese, I saw it "translated" into English; still makes no sense. I've nothing against mindless fluff films, but even check your brain in at the door movies go SOMEWHERE. This picture had me saying outloud "What's the point?!" multiple times.

It starts off with a decent enough premise. In the near future, technology is worth more than gold, so, a group of scavengers are trying to loot an industrial complex on an old island for any left over tech. However, this island is home to a vast computer that had tried to wage war on man some years earlier, and, it's still active. But, any semblence to sense at that point disappears.

In short order, most of the scavengers are killed off in one sitting, leaving only one man and woman. They soon discover a female commando, apparently part of a previously briefly discussed conflict against this computer. They also discover a girl and apparently someone named 11. They eventually find some sort of control room with a vat of green goo and some sort of data crystal. The surviving female scavenger somehow falls into the goo and becomes physically absorbed into a robot whose only function is to roam around the movie and occassionally harass the cast. People get separated by the robot, who takes the data crystal and stabs it through its hand. Okay... from there, we cut to the one remaining free main cast member and the girl who find the remains of a Gunhed, apparently a form of artifically intelligent tank.

They get it working in time to discover the computer has to cycle its energy supply soon, which will basically turn the complex into a nuclear reactor. So, in their attempt to escape, somehow the girl reaches apparatus to drop various bombs all over the place which destroys part of "the city." They escape this and try to find some chemical coolant to stop the reactor process. They have 10 minutes to do this, but, this 10 minutes stretches out over 30 minutes of the film. Meanwhile, 11's mouth starts glowing orange and she locks up the female commando to go to the green goo room and meet the robot. The commando escapes and follows 11 while Gunhed takes on a defense robot called Aerobot. While Gunhed keeps Aerobot busy, our male hero sneaks by and discovers everyone else in the green goo room. The female absorbed into the green goo robot still has a hand grenade with her, so, she detonates it, destroying the robot. The female commando gives our male hero the data crystal, or whatever it is. It could even be the TexMexium, a weird metal that lets computers mentally control humans, as briefly described in the film's opening text.

Out of nowhere, a 10 second self destruct sequence activates. Now, remember, the 10 minutes we had before the reactor started was NEVER resolved, and, now, we have this self destruct to deal with. Gunhed activates its rockets and crashes into a wall, promptly stating, "I can only hold off the self destruct sequence for 15 minutes this way." HOW?! Crashing into a wall will delay a 10 second destruct sequence somehow by 15 minutes? With the counter delayed at 3, our remaining cast escapes the island. This 15 minutes go by in under 1 minute of film time. A mystery plane escapes the island before it explodes. It receives a transmission from the Gunhed that the Gunhed batallion completed its mission. THE END

I dare ANYONE to try and make any sense out of that... The effects by Toho are quite fine, especially by late 80's standards, and even foreshadow the trend the Godzilla pictures would later take on. Reminded me most of Godzilla Vs. King Ghidorah (1991). But, while giant robot movies don't require a tighlty intricate script to work, they must STILL possess the barest modicum of logic. Gunhed, the movie, must have fallen into that same vat of green goo mentioned earlier this the review. In the end, a waste of 90 odd minutes.

Review by Dr Wily from the Internet Movie Database.