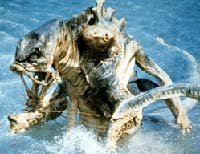 A deep-sea mining crew, counting down to its last few days (well, first, of their project, and later, of their lives--ouch, that was pretty promo-like, huh?) and, seemingly out of nowhere, one of the crew members becomes infected with an odd sort of skin disease, which may lead back to a small, spider-like sea creature brought on board. In any event, things don't look good, and this disease is apparently something more. Something very deadly. This may also explain the sunken Russian ship they find, with the mysterious captain's log and, well...one thing leads to another, and "Alien"-style fun ensues as members of the small crew are infected or killed (or, in one rather unique case, kill themselves), leading up to a somewhat flat climax, where the film falters.

Indeed, we'll start with that. "Leviathan" has a good amount of build-up. Bores the hell out of some people, but it really isn't boring. (And doesn't take THAT long for the screaming to start, so to speak.) We get to know the characters, and what is going on here, and what is causing this whole fiasco. I, for one, liked that, and liked the way the characters are developed. Peter Weller as the pacifist head honcho, Beck. Richard Crenna as the doctor, Dr.Thompson. Amanda Pays as the requisite tough-but-likably-innocent miner, Willie. Daniel Stern as the slimy Sixpack, and so forth and so on. All in all, a great group of characters. (Loved Ernie Hudson's Jones.) And you don't really want to see them all die. So, when it all goes down, the movie manages to envoke some sympathy for them all.

But once it's time to get into action mode (running around steam-filled corridors, toting a flame-thrower, screaming and hollering and all that fun stuff) the movie doesn't deliver. Sure, the final trio of survivors gets to do their fair share of it, and they do it well. But then it just seems like the ending came too quickly, and there was still more to be milked. Let's look at "Alien" again. (I think it's a prerequisite that anyone who reviews this movie mention that one, too.) In the end, after everyone but Ripley is killed, we get a pretty harrowing thrill ride through the soon-to-be-detonating ship. Sure, it goes to the extent of Ripley going back to get the cat, but it's SCARY! And you're on the edge of your seat the whole time. Here...well, no cat, but the the mining ship was going to implode, due to lack of oxygen. So, what happened to all that drama and suspense? I felt a little cheated. Would have loved to have knocked off the others and left Willie running around doing all that fun stuff, trying to escape before she ran out of air. Instead...well, you get the point.

Since we're talking about characters a little, let's move on to the acting. For the most part, the cast gives a good show. Peter Weller is leading man material, and he pulled it off well. Richard Crenna never gives a downright bad performance, and I liked him here. Loved Amanda Pays's British accent, and she gave a good performance. Would have liked her a little bit more gun-ho, though, she seemed to need some saving a little too much. Daniel Stern has a surprisingly smaller role, considering his billing, but he does well with what he has to do. Ernie Hudson is a dependable actor, and you can always trust him to give a great performance. Here, he does it again. I really liked his character, he was probably the one I liked the most of them all. Another great actor is Hector Elizondo, and here he gives another very Hector Elizondo performance, and he does a great job. Lisa Eilbacher also gave a great performance, and I really liked her. Michael Carmine may have seemed a bit like the "we'll think of a character later" Hispanic, but I thought he did quite well, too. Last but not least, Meg Foster, who actually only appears on a television communicating with Beck (she sent them all down there) and a little bit in the end, but, well...she's got the most amazing eyes I've ever seen, and that's the most I could say for her.

The special effects are excellent, and with all this CGI crap we have today, its great to see these "genuine" effects, and they look great.

Overall, the movie isn't bad. It sustains a good amount of suspense in parts, and George P. Cosmatos can handle a swift action scene quite well. Check out "Cassandra Crossing" (the only other Cosmatos movie I've seen--I'll be sure to check out more), it's very Italian but it's a pretty good 70s disaster flick of his. The Jerry Goldsmith score is good, too. Not "The Omen" good, but he never fails to give a pretty rousing score.

So, in the end, "Leviathan" ain't bad. Try the much frowned-upon "Sphere" (I liked it) or "The Abyss" for similiar fun. Enjoy.