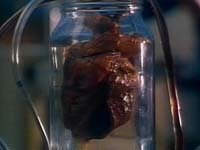 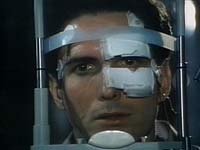 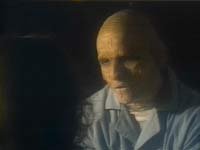 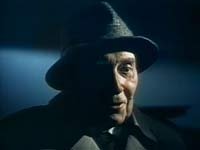 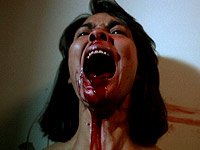 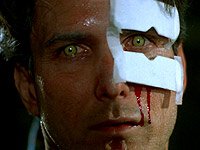 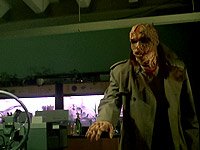 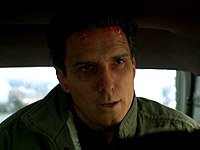 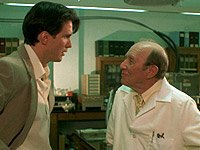 Metamorphosis is set in Norfolk in Virginia where brilliant young genetic scientist Dr. Peter Houseman (Gene LeBrock) works in a university teaching students & carrying out research in DNA, Houseman is trying to perfect a serum that will alter human DNA & reverse the ageing process. Left alone for two years the university administrators want to know where their hundreds of thousands of dollars have gone & send in Sally Donnelly (Catherine Baranov) to conduct a full audit & report back, Houseman fears his experiments are published before they are perfected. Houseman injects himself with the experimental serum & at first the results are amazing as his health, fitness & awareness improve dramatically, however soon terrible side-effects begin to manifest as Houseman's body undergoes a hideous genetic transformation into some form of pre-human reptilian life-form that must feed on human flesh to survive...

This Italian & American co-production was written & directed by George Eastman who is probably best know for playing the killer in Anthropophagus (1980) & Absurd (1981), while Metamorphosis has a bad reputation I didn't think it was a total failure. As has already been mentioned by just about everyone else who has ever seen Metamorphosis the similarities between it & David Cronenberg's brilliant remake of The Fly (1986) are clear to see, the scientist conducting risky experiments on himself, a neutral love interest, the scientist slowly turning into something nasty & experiencing improved strength & senses with a climax where all traces of his previous humanity have gone. In fact the two films are scarily similar in tone & themes even if The Fly is a far, far superior film in every aspect. Good mad scientist films are thin on the ground really, there's the aforementioned The Fly, there's the Re-Animator films & that's just about it really. I liked the ideas here, some of the scientific exposition is dry & dull but I liked the story, it's based around proper people with proper motives rather than dumb teens even if they act dumb quite a lot, there's enough going on to have kept me interested & the story takes the odd turn here & there. The script takes itself extremely seriously with not one bit of humour or irony even attempted. At over 90 minutes Metamorphosis is slow going at times which hurts it & the extremely silly twist ending doesn't work at all although it might have looked clever on a written page as a script it doesn't work when filmed.

The gore levels are restrained compared to some Italian horror, there's a ripped-out throat, there's a few dead bodies, a few girls are knocked around & there's a heart in a jar. The special effects are alright, the make-up is OK until the very end & the final reptilian creature is shown, director Eastman wisely keeps it's screen time down to a minimum, films from waist up & uses quick cuts to try & disguise how bad it looks, he fails as the thing looks so stiff & rubbery. Metamorphosis looks OK, it's a pretty dark film with the climax set in dark university corridors to try & raise some scares but Eastman doesn't quite manage it. I did like the look of this overall, a bit flat & static at times but with a certain atmosphere. Also known as Regenerator here in the UK when it was released back in the 90's on VHS.

Filmed in Norfolk in Virginia the film is set against a Christmas backdrop for some reason, maybe it was coming up to Christmas when it was shot so had to included Santa's on the street & decorated Christmas tree's. The acting is a little dry at times but not too bad.

Metamorphosis is something a little different, it tries to be a complex science fiction horror rip-off of The Fly & the basic idea is here but the execution lets it down. A little too slow, not quite enough gore, a poor looking final monster & a very silly twist ending makes me wonder why I liked it. Well, I don't know but I did for all it's faults & it has it's fair share.