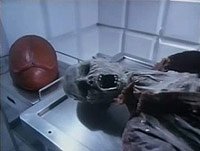 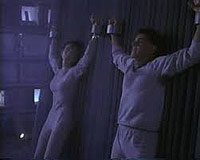 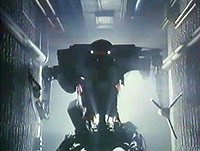 NASA astronauts Koenig and Campbell encounter damaged alien space craft, with a torn hull, while orbiting moon in their shuttle, Chamelot. Discovering a mysterious self-contained alloy shell inside the ship, Koenig also finds the skeletal remains of an actual humanoid, carbon dated at 14000 years old! The shell actually houses a hostile "robotic species" with an incredible intellect..as we soon learn, it uses "spare parts" from whatever junk is lying around to create a body for which will allow it to move about. Returning to Cape Canaveral, the robotic monster goes on a rampage, laser blasting military personnel and anyone else, despite peaceful attempts to see what it wants. After finally "subduing" the machine, the government sends Koenig and Campbell to the moon to see if there's in fact any other signs of life which might exist. Once there, Koenig and Campbell do find the remains of a once thriving alien civilization, skeletons, weapons, and buildings, reduced to rubble or buried in the dust. What Koenig and his colleagues do not realize is that the species which left the humanoids dead so long ago have waited for the right kind of parts needed to juice up their ship, an attack on Earth imminent. It'll be up to Koenig to stop them or else. Koenig and Campbell also find an actual female of that civilization alive, kept sealed in a chamber from harm. Getting off the moon will be especially difficult when they find their lunar lander missing, commandeered by the robotoid species.

Plenty of intriguing ideas and admirable use of limited resources, Moontrap is a fine example of creating something out of nothing. The robot monsters are rather nifty little creations, not to mention you get action on the moon and within an alien space craft. Impressive recreations of various equipment associated with NASA. How the filmmakers accomplished so much with so little is a testament to what you can do with ingenuity and creativity.

Nice star vehicle for Star Trek's Walter Koenig(..which was initially what drew me to it in the video rental store as a kid)with able support from wise-cracking Bruce Campbell as his partner.

I imagine there are those who could balk at certain aspects regarding flawed science, such as the scenes on the moon where bodies and the robot creatures move fast where gravity is a problem. The whole scenario involving 14000 year old human life on the moon might cause eye-rolling as well, but I thought it was certainly original, which is something in itself. Also rather creepy are the robot monsters which not only use junk parts from whatever metal might be lying around, but from actual human beings as well! You can actually see such things as a spine, various bones(..even the head of a victim!), and other human parts melded in with mechanical pieces. The shell opens and a robot head appears, with thin, strand-like tentacles which reach for the parts necessary for building it a body.

A criticism early on one might could use is how the first robot monster withstands the bullet-fire of a military arsenal despite the fact that it basically used metal in a laboratory..highly doubtful that such material, for the creation of legs and arms with claws, could remain insusceptible to a constant barrage of gunfire. Leigh Lombardi is the humanoid, Mera, discovered by the astronauts in the chamber on the moon.