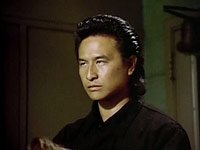 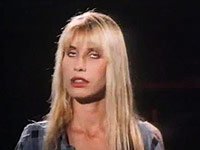 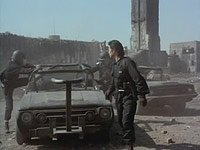 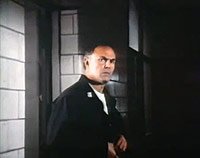 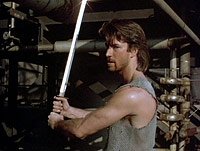 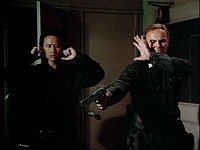 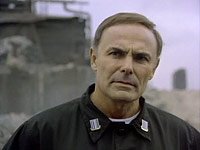 In a post-apocalyptic world, society is broken up into fascist-type overlords and their minions who try to control the population, and the rebels who fight the baddies for their freedom. Everyone in society is required to have a barcode on their arm. However, the underground resistance is gathering steam with their "Start To Question!" campaign, which they push through flyers, spray-painted walls, and other means.

The catalyst for the ultimate battle between the Empire and the Rebels is a beautiful extraterrestrial named Sabina (Kaitan). Baddie Oliver Quinn (Saxon) wants to experiment on her, but rebel Willie (Roberts Jr.) wants to run away with her. Will it be World War III...again?

Aftershock may be one of the many, many post-apocalyptic movies out there (we call them post-ap's for short), but it has a handful of things going for it that its competitors don't. Its Star Wars-esque plot allows for some actual ideas to come forth, which is more than some of the others can claim. Also, on the whole it's a lot better than, say, Bloodfist 2050 (2005) or Dragon Fire (1993). It's directed by Frank Harris, who is very well known to us from his action films of the 70's and 80's, and the whole thing gets funnier and more enjoyable as it goes along. By the halfway point, things really start to pick up.

But, unquestionably, Aftershock has one of the best B-Movie casts ever. We don't say that lightly. Somehow Harris was able to corral an amazing bunch of people - and the whole thing doesn't even fall prey to Lone Tiger Effect. Sure, with such a cast, not everyone gets all the time in the spotlight they perhaps should, but the movie overall is far from a dud. Here's a breakdown:


Review by tarbosh22000 from the Internet Movie Database.