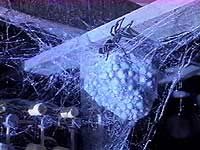 The directorial debut of Frank Marshall, otherwise known as the producer of everything you ever loved from the 1980's, Arachnophobia is a creature-feature that was heavily marketed as both a comedy and a horror film. It is one of the better regarded disaster films from the 1990's, the decade that saw a dramatic resurgence of the genre, with a 91% rating on Rotten Tomatoes. At best, it deserves a low 60.

Strangely for a 90's disaster movie, Arachnophobia's acting and screen writing are both quite sturdy. The reliable Jeff Daniels plays a dry-witted but rather pleasant urbanite GP called Dr. Ross Jennings, who has arrived from San Francisco with his family (all of whom are played reasonably well). Jennings, who (big surprise here) suffers from arachnophobia, clashes with the colourful locals before having to confront a sodality of aesthetically displeasing arthropods from the rainforests of the Amazon. The plot is largely logical and believable in its progression, bar a few inexplicabilities here and there. While it is all rather run-of-the- mill, it is competent, enjoyable, and at times even clever.

But where the film thrives on writing and performance, it falls pathetically short of the mark on matters of tone and technical ingenuity. For being an individual with the titular phobia, I found this film profoundly flat and pedestrian. You'd think that if Alfred Hitchcock was able to instil blind terror with the mere sight of a flock of disgruntled birds, then Frank Marshall would be able to at least quietly unsettle with the image of spiders invading a living room. It would be unfair to say he did not manage to extract any terror from those scenes, but where Marshall could have spent a nice chunk of his 103 minute runtime building a pronounced aura of menace, he instead tries to crack jokes so tepid a late 80's sitcom wouldn't dare touch them with a ten-foot pole.

The film, quite simply, should not have been a comedy. Besides the Sam Raimi-esque camp of the climatic showdown between Jennings and the boss spiders, the jokes just do not work. Some of them are even downright grating. Halfway through the film, the arach-attacks start taking centre stage, and the narrative is given a sudden surge of suspense. What does the film do then? Why, it devotes an inordinate amount of our time to a stupid comic relief character called Delbert, because that makes sense. It's not as though there's infinitely more interesting material to be followed up about extremely venomous spiders; no, what we all need -' nay, what the 90's needed -' was an insect exterminator (played by John Goodman) whose entire humorous conceit is that he's fat, has a weirdly effeminate voice, and may or may not be very good at his job.

Worse still, the production values have a television film vibe about them, particularly the music. Composer Trevor Jones gets some nice strings and brass involved in the climax, but otherwise the whole thing sounds more dated than the incidental music for 'The X-Files'. Delbert's leitmotif is the undoubtedly the worst offender. You could overlay it on the 'Too Many Cooks' video and it would be a perfect fit.

Review by TheFilmFreak1 from the Internet Movie Database.