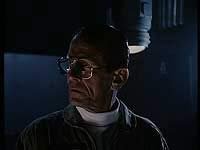 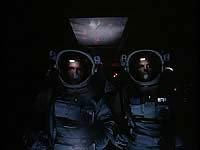 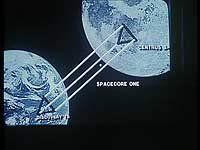 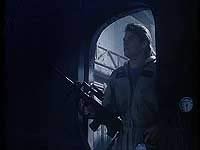 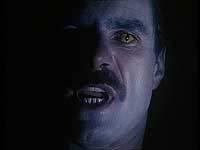 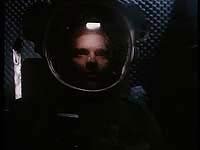 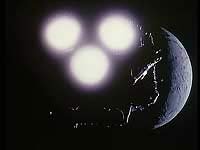 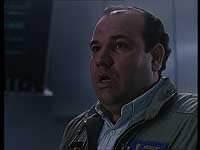 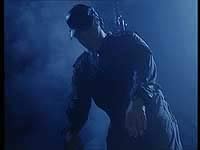 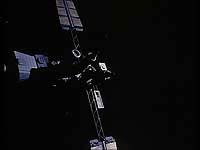 This film just goes to prove what can be done without big stars, a huge Hollywood budget and unnecessary CGI effects. A good story, (if a little iffy), relatively good acting and an air of claustrophobic suspense beaten only by 'Alien'. OK, it's cheap and nasty, but look at the budget Star Wars was filmed on!

This movie has no delusions of grandeur, it just delivers within it's own limitations. The basic premise is this, the Devil has to collect 666 souls to re-enter or defy Heaven. He's been using the Bermuda Triangle to collect these souls. This being the future a tenuous link is created between the Triangle and the dark side of the Moon. As it turns out, the crew of a space missile repair team would just complete the numbers. After major systems failures the crew encounter a derelict space shuttle, thought lost, (in the Bermuda Triangle), 20 years before. They board it in the hopes of finding vitally needed supplies and instead find a crew member, dead but perfectly preserved, except for a strange, triangle shaped hole in his stomach. Little realising that this mysterious corpse is in fact the manifestation of the Devil come to collect His final souls, they take the body aboard and begin repairs to their own ship.

THIS is where the film really begins!! Using their own fears and desires against them, the Devil "body-hops" from one crew member to another, creating an atmosphere of paranoia and distrust, a la The Thing, intent on nothing but collecting His final souls and 'having it out' with The Powers That Be. Granted, the plot has more holes in it than a super-size colander and the effects are on a par with Space:1999, (which still makes it better than Buck Rogers and Battlestar Galactica!), but this is a fantastic movie which deserves far more attention than it got. I first saw this in the graveyard slot on Sky, between midnight and 6am, back in '92, and I don't think I've even seen it at the very back of a video shelf since, certainly not on any market stalls, which I think is a damn shame for a fine movie sadly overlooked. If you get the chance, WATCH THIS FILM.

OK, it's easy to spot what it's mimicking and to make fun of the effects, but this is a darn good way to spend 90 minutes and remember what films where when they weren't just an exercise in computer programmers skill, or lack thereof.

Review by lord_malasombra from the Internet Movie Database.