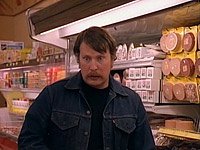 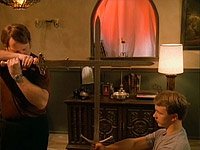 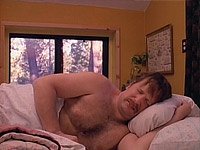 Let's be clear: this is NOT a good movie. At all. But if you are looking for an involuntary comedy with lots of fun to offer, then look no further.

Empire of the dark is the second production of self-made auteur Steve Barkett, an overweight, self styled "action hero" who also directs, edits, scripts, produces and choreographs the fights in this...thing. His son -his spitting image, although with 30 kg of fat less- co-stars as...his adoptive son. Talk about imagination! What makes these kind of movies fun is not only the incompetent acting, effects and cinematography, but the astounding ambition of Barkett, who wrote a convoluted script with a lot of stuff he certainly should have known he didn't have the money nor the talent to pull off. As a result, the flick is ambitious well beyond his means, and each disastrous scene tops the next one, without giving any room for boredom.

The "plot" is a bit more ambitious of what you expect from this kind of flick. Cop Barkett receives a call and goes to the rescue of an old flame. She happens to be trapped in some kind of alternate, hellish dimension where she is to be sacrificed by some devil-worshipers. While there, he fights the cult, but at the last moment he is forced to choose between saving the girl, or saving her baby, who was also going to be killed. He chooses the latter, rescues the kid, and leaves the alternate dimension just in time.

20 years later, aside from his mustache Barkett looks remarkably similar to his "younger" self two decades prior. He has been training in sword-fighting as to be prepared in case the cult reappears, and, guess what, that's exactly what happens.

I won't spoil the rest of the movie, but it's INSANE. Just when you think you have seen it all, the last ten minutes blow your head off. And even in the last seconds of the movie, we are treated with a death scene so stupid, so convoluted and forced, you won't believe it until you see it.

Credit where it's due, I've read that many guys who worked in this film managed to to great in blockbusters like Avatar and such, mainly in the technical areas. So limitations aside, Barkett seems to have had a great eye for talent.

Review by jmgindiana from the Internet Movie Database.