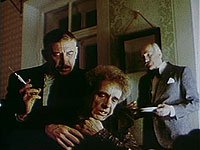 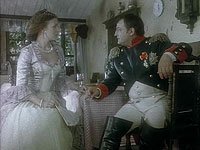 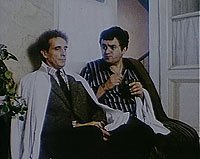 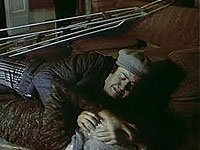 I haven't yet read the book that this was based on, but I quite liked the confidently eccentric and thoughtful film that it spawned. It takes a fantastical concept - of a group of immortals forced to forcefully consider admitting another when he finds out about them, and lets it unravel itself in a thought-provoking, involving fashion with strong acting all around.

It's interesting that the title refers to a temptation, since the band of immortals mainly starts by threatening and bullying our hero into joining them, which only results in stubborn resistance. He's not so much tempted with immortality as told he'll be murdered if he doesn't take it. By the time the result to temping him -- with a chance at literary greatness or simply with sex, they have already lost him and shown that, though immortal, they are also quite powerless -- and thus wield less less and less power over him.

Though our protagonist is named, it's appropriate that he should be B in the title, allowing him to act in an every-man capacity -- bewildered and then indignant at the events around him.

In some ways it's a film of two parts, with a prologue that centers around a man (along with the audience) largely trying to straighten out what exactly is going on in the strange events around him. This eventually satisfyingly resolves itself into the long, tense, overnight scene full of well-written dialogue in his apartment as everything is revealed. It's the simplicity of this major parts that allows a focus on character and though amid an out-of-the-ordinary premise.

One quibble I have is with the repeated practice of showing the immortals as if they appear in the costumes of centuries before; this seems unnecessary, and takes us farther from what could have been a nice level of ambiguity about how believable their claims are.

There's a strong implied theme here about humanity -- about how maybe it doesn't really deserve immortality. The main immortal insists he's outlived any kindness he may have had, and his potential new recruit boggles at how these people can live while Pushkin is still dead.

In all quite recommended for those who like like the "new wave science fiction" combination of a fantastical concept with thought-out a view of how it might play out, formidable acting, and strong, theatrical dialogue. It's inspired me to seek out the work of the Strugatsky brother in text form as well, to see how they compare.